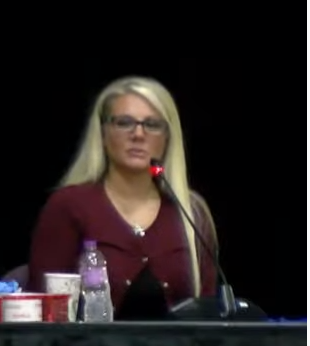 Stephanie Juga was shot herself as she confronted the gunman she identified as Fuller. The shootings occurred on the second floor of the family's home.

Juga's testimony began with a description of her daughter. "She had a huge heart. She was amazing. She always thought about everybody else before herself," said Mrs. Juga.

In her sophomore year at Bradford High School in 2018, Kaylie, a cheerleader, met classmate Martice Fuller, a quarterback on the high school football team. "She talked very highly of him at first and how she had met this boy and he was cute," Juga said.

The two started dating, and Martice spent a lot of time with the Juga family, going on outings and eating dinners together. "I thought he was a good kid," she said.

Stephanie Juga’s feelings gradually changed about Martice as he showed an ugly side of possessive behavior toward her daughter. Several months after the pair started dating, Fuller became physically aggressive toward Kaylie. Two incidents at Bradford high school resulted in Martice being kicked out of school and off the football team. Fuller asked to meet with Kaylie’s parents to explain himself. "Kaylie downplayed it. He downplayed it a lot," Stephanie said. "And we believed him."

Things didn’t improve—they only got worse, as Martice blamed Kaylie for his troubles. Nuisance messaging continued. Attempts by Fuller at relationship rekindling seemed to give way to anger. Stalking started.

And Fuller, unbeknownst to the Juga family, acquired a gun and began to plot.

After school on May 9, 2019, Fuller allegedly snuck into the Juga home, and apparently without saying a word, purportedly shot Kaylie five times in her bedroom, and confronted Stephanie as she went to investigate the gunshots and screams. "I looked at him and said 'Oh my god Martice...please you don't have to do this' and he looked at me and said 'Yes I do,'" Mrs. Juga said.

Fuller allegedly shot her twice then fled. Despite being seriously injured, Mrs. Juga performed CPR on her daughter before help arrived.

Officers, who at that point had no idea whether a threat still existed in the home, carried Kaylie to the front lawn to resume CPR.

Still in her daughter’s bedroom, Stephanie received treatment from a paramedic who was escorted upstairs. Rescue squads staged at a safe distance from the home.

Stephanie was eventually removed from the home by a police officer. "He put me in the back of his squad car and brought me down two blocks where the ambulances were," she said.

"And when you went outside did you see Kaylie outside?" asked prosecutor Angelina Gabriel. "I did," Mrs. Juga responded. "She was laying on the front lawn and they were performing CPR," she said. Mrs. Juga, who remained conscious during the minutes following the shooting, said she later learned that Kaylie more than likely died in her bedroom.

Mrs. Juga tearfully told the jury she’s still in pain from her injuries and from the emotional trauma, saying she’s still terrified at times to be in her house.

WGTD is streaming live video from the courtroom on the station's YouTube channel.

A recording of Tuesday's testimony is available here.