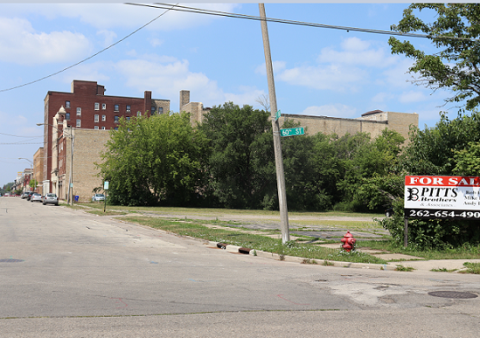 Now he’s looking at a pair of apartment buildings to straddle 6th Ave. just south of the Kenosha Theater. A 100-unit, five-story building would be built on the west side of the street, replacing a parking lot and a former bank building which would be demolished. A smaller structure with 50 apartments would be located on vacant land on the east side of 6th Ave.

Ebacher is bullish on Kenosha. "I do believe that the City of Kenosha has a beautiful downtown, has wonderful amenities. It has a population base that is growing--has an economic base that is strong and healthy and continues to probably exceed national standards," he said following Thursday's Plan Commission meeting during which commissioners recommended approval of a new tax incremental financing district.

The district would allow the city to pick up about $2.5 million in public improvements to the site.

Design details of the two new structures are expected to be considered at a future meeting.

Ebacher says groundbreaking depends in part on just how fast the city approves the project.

There’s word that a multi-story building with 150 market-rate apartments are targeted for vacant land on 6th Ave. south of the former Kenosha Theater.

The Plan Commission this week is expected to establish a new tax incremental financing district to overlay the site and adjacent properties.

Community Development Specialist Zohrab Khaligian says the goal is to set up a mechanism whereby the city would eventually cover the costs of public improvements that would be necessary for the new building.

The identity of the developer hasn’t been revealed.

The downtown area has seen a burst of new housing, something that city planners have always said would be essential to support robust retail in the district.

Currently under construction is Lake Terrace, a 68-unit, five-story building that’s going up a couple blocks away from the planned development.