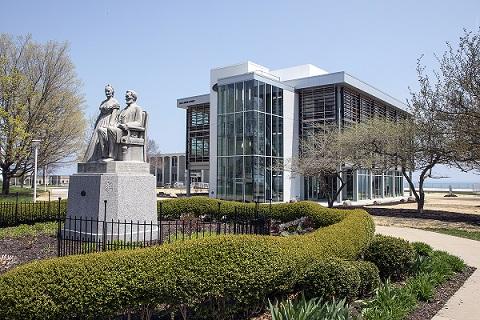 (WGTD)---A ribbon-cutting ceremony held Thursday marked the completion of a $7 million project to turn a building on Gateway’s Racine campus that was once considered for demolition into a state-of-the-art facility for nursing instruction and related programs.

The Lincoln building had sat in limbo for years. The 60-year-old structure originally built by UW-Extension was inherited by Gateway when the technical college took over the Extension buildings in the 1970s.

Over the years, Gateway used the building for a variety of purposes, according to Gateway President Bryan Albrecht. Finding a dedicated use for the structure was one of the items that Albrecht put on his 'bucket' list when he became Gateway president 16 years ago.

It wasn't until 2017 that serious discussions were launched to determine the building's future.

With the advent of the Lincoln Center for Health Careers, Racine residents will no longer have to go out of town for nursing instruction, and Gateway is able to increase its capacity to train students in the nursing field.

Gateway health programs are also taught at its campuses in Kenosha and Burlington.