A Night of Vandalism and Violence Follows a Kenosha Police Shooting 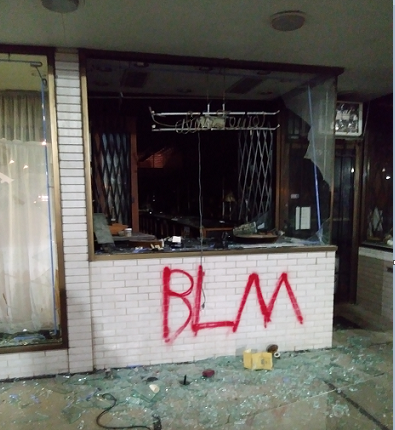 (WGTD)---Police used rubber bullets and tear gas early Monday to break up a large crowd of young people, some of whom had set fires, broke downtown storefronts and looted, in response to the shooting of a black man by a white police officer Sunday night.

Flames were seen shooting from in front of a first floor window of the Kenosha County Courthouse. It was unclear if the building itself was damaged to any great extent.

A crowd of about 150 unsuccessfully tried to gain entry to the Public Safety Building. Several public works trucks that had been positioned to block streets near the PSB were set ablaze.

It appeared that storefronts were smashed on several dozen downtown businesses, mostly on 56th St. and 6th Ave. Some looting was reported. Within an hour after the damage, employees of the Buzz and Sassy B were sweeping up glass shards from the sidewalk.

At about 2:15 a.m., vandals had set fire to vehicles in a used car lot on Sheridan and 58th and then blocked the road. The several dozen vehicles in the lot were destroyed.

Authorities had activated the Emergency Alert System to first announce a curfew, and later warn 24-hour businesses that they should consider closing because of numerous 'shots fired' complaints in the city. Police were investigating a report that a clerk at Kwik Trip at Green Bay Rd. and 52nd St. had shot someone who had tried to rob him.

The curfew was declared after things started getting out of hand at the scene of the shooting at 28th Ave. and 41st St. A police officer was struck in the head by either a rock or brick and was knocked unconscious. At least one squad car was damaged. At one point, officers who weren't equipped with riot gear were ordered to leave the area.

The man who was shot, believed to be 29-year-old Jacob Blake,  was said to be in serious condition at a Milwaukee hospital. But in a conversation with a reporter later in the evening, a friend of the man's fiancee described his condition as critical.

Gov. Evers issued a statement Sunday night comparing the shooting to George Floyd and Breonna Taylor. "We stand with all those who have and continue to demand justice, equity, and accountability for Black lives in our country," Evers said. "While we do not have all of the details yet, what we know for certain is that he (Blake) is not the first Black man or person to have been shot or injured or mercilessly killed at the hands of individuals in law enforcement in our state or our country," he said.

The video of the actual shooting that was posted on social media shows two officers chasing a man around the front of a SUV as people are screaming in the background. As the man gets in on the driver's side, an officer grabs the man's t-shirt, then appears to shoot him in the back. Seven or eight gunshots ring out. An officer pushes a woman away from the vehicle. Then the clip ends. Neighbors said the man's children were present.

The incident set off an immediate fury in the neighborhood and extra officers and Kenosha County Sheriff's deputies were immediately called to the scene.

It's not known if the man who was shot was armed. That didn't stop TMZ--a national online publication--from running the headline "White Cop Shoots Unarmed Black Man."

A brief news release put out by the police department said officers were originally called to the scene for a domestic incident. Stories at the scene varied--one said the man was trying to break up a fight.

One witness said it appeared one of the officers had tried to 'taze' the man.

Police cordoned off a large area of the street, then silently stood along the yellow tape while groups of people yelled at them.

One woman told a reporter, "The police are trigger happy. Black lives do matter and they need to understand that."