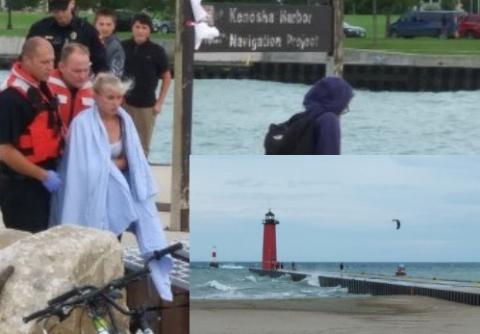 Updated at 10:20p with additional detail and the status of the search.

According to a student who'd been taking part in the project, a girl and a boy jumped into the harbor channel off the far end of the pier, then ran into trouble when strong currents started pulling them away and out into the lake.

The girl made it back to the pier safely after trying to help the boy, but he went under.

The student who talked to reporters also jumped in, but he wasn't able to help either.

Both of them got out safely.

The student told reporters that the relatively calm waters of the harbor channel made it appear to be safe, unlike the Lake Michigan side of the pier, where waves periodically crashed onto the structure as rescue personnel arrived on the scene.

At the time of the incident, a  Beach Hazards warning from the National Weather Service urging people to stay out of the water because of high waves and rip currents was in place.

Forecaster Denny VanCleve said people need to take such warnings seriously. "Sometimes it's hard to gauge what the currents are doing simply by looking at the water," he said.

The warning for high waves and strong currents is expected to remain in effect until Monday morning.

The search for the victim's body was suspended about an hour after sunset Thursday evening. It was expected to resume in the morning.

The effort included boats, sonar, divers and a helicopter.