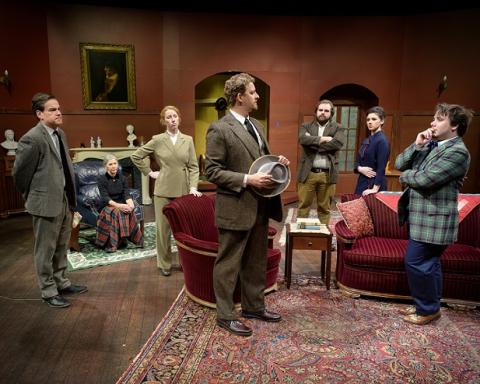 From the Racine Theatre Guild:

Eighteen months after closing their doors due to the COVID-19 pandemic, the Racine Theatre Guild (RTG) has announced plans for their 2021 – 2022 season to begin in December 2021. Entering their 84th season, the community theatre will be producing a smaller line-up of plays and musicals that still bring music, mystery, and mayhem to the RTG stage as they return to live theatre performances.

Season subscriptions will go on sale October 4, starting at just $55 and include “A Christmas Story,” “Nunsense,” “Guys on Ice,” “Clue,” and “Mamma Mia!.” A limited run bonus show, “Akeelah and the Bee,” can also be added on to subscriptions. For audience members with varying schedules and interests, flex passes will also be available. Individual tickets sale dates will be announced at a later time.

RTG had planned to produce both “Akeelah and the Bee” and “Mamma Mia!” during their 82nd season, but made the decision to postpone performances on March 18, 2020 with “Akeelah” one and half weeks from opening and “Mamma Mia!” just beginning rehearsals.

“We were committed to ensuring that the cast and crew members would be able to perform the productions they had worked so hard on,” Doug Instenes, managing and artistic director, said. “When the play reading committee was discussing what shows would be a part of this season, we were all in agreement that ‘Akeelah and the Bee’ and ‘Mamma Mia!’ should have a spot.”

“We have missed having the community come together at RTG over the past year and a half,” Instenes added. “We are excited and grateful to be able to do live theatre with our volunteers and audiences once again.”

By Philip Grecian. Based on the motion picture “A Christmas Story,” © 1983

Ralphie Parker only has one wish: to wake up Christmas morning with the coveted Red Ryder Range Model Carbine Action BB Gun under his tree. While he plans and schemes to ensure it arrives, he’s met with the same response again and again, “You’ll shoot your eye out!” One of the most iconic holiday movies hilariously comes to life on stage, complete with all its pink-bunny-suit, glowing-leg-lamp, triple-dog-daring glory, full of heart and laughter for the whole family.

When an accidental case of botulism from Sister Julia Child of God’s cooking wipes out most of the order of the Little Sisters of Hoboken, the remaining nuns must raise funds to bury their dearly departed sisters and keep their convent afloat. Ballet-loving Sister Leo, street-wise Sister Robert Anne, befuddled Sister Mary Amnesia, the Mother Superior Sister Regina, and mistress of the novices Sister Mary Hubert ttempt to throw together a haphazard variety show. Complete with tongue-in-cheek numbers and funny talent acts, it’s sinfully hilarious musical comedy!

Book and lyrics by Fred Ally; Music by James Kaplan

In the middle of freezing Wisconsin winter, on a deep frozen lake, there stands a little wooden shanty, bursting at the seams with more comedy and music than fish. Long-time fishing buddies Marvin and Lloyd, spend their time on the ice sharing their hopes, jokes, dreams, and tall tales with a couple two three beers on hand. Songs like “Ode to a Snowmobile Suit,” “Fish is de Miracle Food,” and “The One That Got Away” give a sneak peek into the secret world of the ice fisherman.

Based on the screenplay by Jonathan Lynn; Additional Material by Hunter Foster, Sandy Rustin, and Eric Price

Thunder crashes, lightning flashes, and rain pours as a cast of mysterious characters gather for a dinner party where murder and blackmail are on the menu. Each is given a familiar alias – Colonel Mustard, Mrs. White, Mr. Green, Mrs. Peacock, Professor Plum, and Miss Scarlet. When their host mysteriously turns up dead, they all suddenly become a suspect. In a slapstick evening full of madcap murder and mystery, it is a race around the board to solve the puzzle as the body count continues to rise.

Akeelah and the Bee

Based on the screenplay by Doug Atchison; Adapted for the stage by Cheryl L. West

Akeelah lives and breathes words and has a gift for spelling. This passion is overshadowed by the daily realities of her life in a tough Chicago neighborhood. Despite her mother’s objections, she studies and prepares for the National Spelling Bee with a determined spirit. As the underdog, Akeelah’s spunk and tenacity teach us all a little something about triumphing over any obstacle. With less than two weeks until its opening before the COVID-19 shutdown, the play returns to finally bring Akeelah to life on the Racine Theatre Guild’s stage.

Music and Lyrics by Benny Andersson and Björn Ulvaeus; And some songs by Stig Anderson

Mamma Mia! Here we go again! On a Greek island paradise, Sophie is getting ready to marry her fiancé, Sky. To make her wedding day perfect, Sophie hopes and dreams that her father walks her down the aisle. The only problem? She doesn’t know who he is! After discovering secrets from her mother’s past, Sophie invites three men who could all be her father to the wedding. Intertwined with ABBA’s timeless songs, the hit musical is a celebration of love, laughter, family, and friendship.