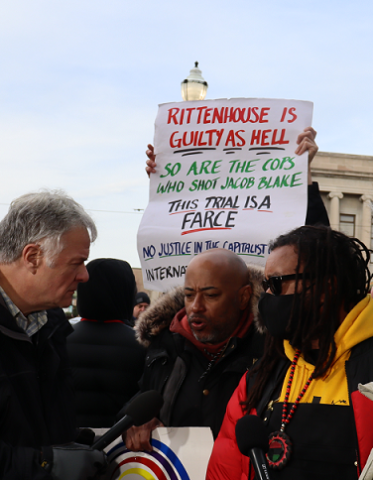 (WGTD)---People that gathered in Civic Center park and the area in front of the Kenosha County Courthouse remained peaceful in the immediate hours that followed Kyle Rittenhouse's acquittal on all charges.

Rittenhouse--who had faced the prospect of life in prison had he been convicted of the most serious charge--shook and cried as the verdicts were announced during the noon hour by Judge Bruce Schroeder.

Afterward, defense attorney Mark Richards told reporters that he hoped Rittenhouse, moving forward, will take a low profile. "He has to get back to living his life as best he can," Richards said. "I think eventually some anonymity will come back to it."

Richards said he doubted Rittenhouse will continue to live in this area. "He's had 24/7 security since this has happened."

Asked whether Rittenhouse has remorse, Richards responded: "Remorse manifests itself in different ways."

While chief prosecutor Tom Binger announced well before the verdicts were reached that he wouldn't be commenting afterward, his boss, Kenosha County District Attorney Michael Graveley issued a written statement. "We respect the jury verdict based on three-and-a-half days of careful deliberation," the statement said. "Certainly, issues regarding the privilege of self-defense remain highly contentious in our current times. We ask that all members of the public accept the verdicts peacefully and not resort to violence."

A non-stop stream of vehicles passed the courthouse on 56th St. Some drivers took cell phone video of the demonstrators that still gathered on the courthouse steps. Reporters were busy getting reactions to the verdict. There was no strong presence of law enforcement. Nor were there any signs of the National Guard. Helicopters--presumably from television stations--hovered overhead.

Jacob Blake's uncle, Justin Blake, and Bishop Tavis Grant, leader of the Rainbow Coalition in Chicago, drew a throng of photographers and reporters. They both decried the outcome of the trial, and call for continued protests.

Tanya McClean, Executive Director of Leaders of Kenosha, a group that sprung up soon after the police shooting of Jacob Blake, issued a statement. "We know that even a guilty verdict cannot deliver justice, bring back Anthony Huber and JoJo Rosenbaum, or ensure true safety for our communities. We are coming together to show our leaders in Kenosha, the White House, and everywhere that we won't stop until they meet this moment, fund our lives, and secure justice and safety for all, no exceptions."

In a statement, Kenosha Mayor John Antaramian called for calm. "We all may not agree because we all look at the world differently, but we must engage in civil and respectful dialogue."