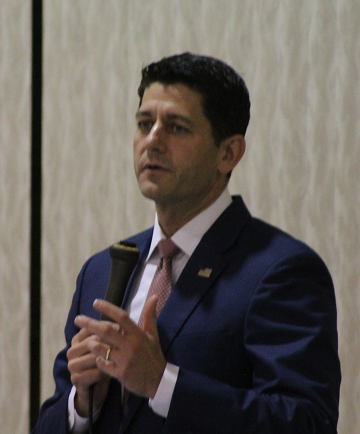 Some of the first friends that Paul Ryan made in Kenosha while making the rounds as a first-time candidate for Congress back in 1998 were some of the leaders of the city’s Italian-American community.

Ryan--who didn't forget---became a regular guest at the Italian American Society’s annual Columbus Day banquet, even in his current capacity as Speaker and while busily campaigning in 2012 for vice-president as Mitt Romney's running mate.

So there he was again Sunday night, even though he’s no longer on the ballot this November, showing up to formally thank some of the people who helped launch his political career. "I want to say thank you to members of the Italian community in Kenosha who took a risk and opened your arms and invited this Irish-Catholic from Janesville," Ryan said. "I'm just so grateful to the warmth and compassion and the friendship you showed me over all of these years," he said.

Ryan's only reference in his short remarks to politics had to do with political civility. Ryan noticed that not everyone in the crowd shared his political views, calling out by name several Democratic legislators who were also there. "We always got along personally," Ryan said of the three Democrats. "We represent old school politics and that does not mean it's old forever. We can revive civility in politics," Ryan said.

Steve Torcasso was honored for having served as the Society's president for the past 30 years.