Ryan Celebrates at the White House While Protesters Rally in Racine 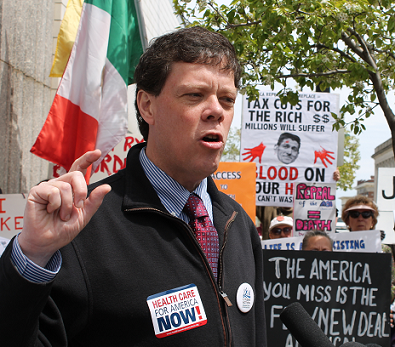 President Trump called Paul Ryan a genius for shepherding the Republican health care bill through the House Thursday. But back home in the district, that’s not how protesters were describing the Speaker.

"The fundamental thing that Paul Ryan is doing is pulling us out of the equation and leaving people at the mercy of insurance companies, drug companies and essentially Wall Street to decide who's profitable to insure and who they'd rather not insure because they might be costly," said Robert Kraig of Citizen Action of Wisconsin at a rally Thursday in front of Ryan's Racine office on 6th St.

Kraig views a host of provisions in the Obamacare replacement bill that passed the House by a four-vote margin as being bad for consumers.

A short while later in the Rose Garden at the White House, President Trump, Ryan and other Republican congressional leaders were basking in the glow of the victory. Ryan said the American Health Care Act will lead to a vibrant insurance marketplace that’ll result in lower premiums. "It makes health care more affordable," he said. "It takes care of our most vulnerable."

The future of the bill is now in the hands of the Senate where its expected to undergo significant change. "We still have a lot of work to do to get this signed into law," Ryan conceded. He got an unintended chuckle when he said his colleagues in the Senate were eager to get to work on the bill.

Meanwhile, Kraig and his supporters are gearing up for another fight. "This is far from over," Kraig said at the Racine rally. "Even if the Senate and House somehow reach agreement, this is such a big public issue now that in 2018 it'll be one of the dominant if not the dominant issue in the election."