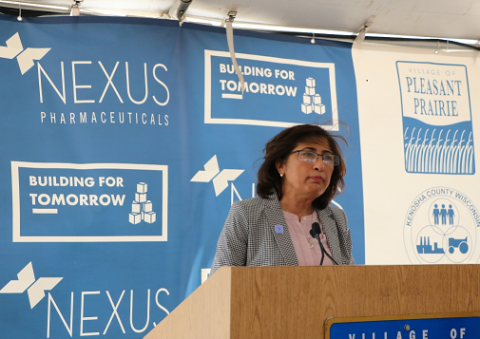 Nexus Pharmaceuticals describes itself as a company that specializes in developing innovative processes to manufacture specialty and generic injectable drugs. Although a research facility is located in Lincolnshire, IL., all of its drugs are currently made under contract, and mostly in Europe. Why the switch? "We want to control our own destiny," said John Cook, vice-president of manufacturing. Producing drugs in-house will allow Nexus to respond more quickly to market demands, he said.

The $85 million, three-story facility will go up in Prairie Highlands Corporate Park in the northwest quadrant of I-94 and State Highway 165. One of its neighbors will be candy-maker Haribo. The land was once owned by Abbott Labs but was later sold to the village. Abbott purchased hundreds of acres of land a number of years ago amid speculation that it would eventually expand to Kenosha County. That never happened.

Nexus is expected to employ at first about 75 workers, most of them in the manufacturing sector. If the company continues to grow as anticipated, the payroll could top over 300 in ten years. Company officials said they'll be relying on Gateway Technical College to help train workers.

The announcement was made under a tent near the company's site. Gov. Evers was among those who attended and spoke.

Also speaking was Kenosha Area Business Alliance President Todd Battle. "When we think of our community and the types of companies we want to build our economy around, this is kind of a dream come true," Battle said, citing the company's growth potential and community-supporting philosopy.