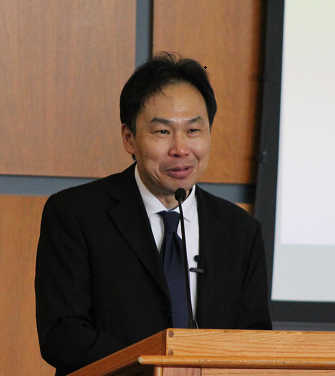 Foxconn’s top U.S. executive brought the Foxconn story and the company’s vision for Wisconsin to a statewide science and technology symposium at UW-Parkside Tuesday.

Alan Yeung, director of Foxconn’s U.S. strategic initiatives, urged the audience to judge Foxconn and the state’s investment in it, by considering the facts. "If you listen to some of the news reports, you can't really find any winners with this $10 billion investment because everybody seems to be losing," Yeung said in reference to the company's investment in Wisconsin. "But we can figure out between facts and data on one hand and maybe opinion and conjecture on the other," he said. "We would not come to Wisconsin to spend $10 billion to pollute, especially when we'll be working there; we'll be living there; we'll be commuting there," he concluded.

Yeung’s Foxconn portrait is that of a extremely successful company that’s constantly evolving, and moving in rhythm with market forces, yet not afraid to think big.

Yeung, who did his undergraduate work at UW-Madison, will be back at Parkside next week for the launch of the previously announced, “Smart Cities, Smart Futures” competition.