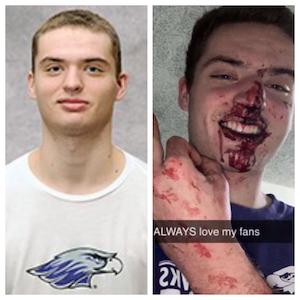 (WGTD)---Nearly 3,000 signatures have been gathered in less than 24 hours on Change.org, a digital petition website, after an alleged overnight assault by a University of Wisconsin-Whitewater men's basketball player left at least one woman bloodied. The petition calls for the removal of Will Schultz, a freshman at UW-Whitewater, from the team or a suspension from school. According to video shared online and TikTok, Schultz entered an area tavern and made advances toward a female bartender. When those advances were rebuffed, Schultz allegedly followed the woman and punched her in the face. Schultz allegedly returned to the bar and confronted and punched at least one other woman before being chased away. Schultz allegedly bragged on social media about the encounters where he wrote he will “always love my fans.”

The Change.org petition was started by Zoe Messing who alleged that her friend was attacked so badly that night by Schultz her eyes were “swollen shut.”

In the aftermath of the encounters several students shared their past experiences with Schultz. Including Grace Lawler, who alleged Schultz followed her home on multiple occasions and knocked on her dorm room door. Another student, Dillon Ebbert-Moede, claims Schultz entered his girlfriend's dorm room unannounced and made “uncomfortable” overtures. Brii Zeiger claims that Schultz entered her dorm while her roommate and friends were there. While Zeiger was not present, her friends called her ‘freaking out” after Schultz walked in unannounced. Zeiger says her friends did not know who Schultz was at the time.

Will Schultz, seemingly responding to the accusations against him on the very Change.org petition page seeking his removal, said in part that he "barely even hit the B****" and that girls are "hard to read." The veracity of the post could not be verified.

UPDATE: WGTD received a response from Jeff Angileri, the Director of University Communications:

"This incident has been reported to the university. Please be assured that UW-Whitewater responded immediately to the situation in alignment with our university and UW System policies. Because of the nature of these situations, we cannot disclose any additional information and it is important for all involved that we follow our procedures.