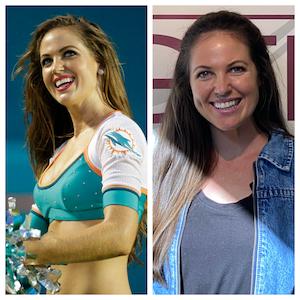 (WGTD)---A former Miami Dolphins cheerleader says she filed a formal complaint against the team after being ridiculed because of her religion and because she was a virgin.

Kristin Ann Ware’s story is one of several that are told on stage at Carthage College in a new play called “The Handbook.” The final two performances are tonight and tomorrow night.

In the studio yesterday to record Friday's “WGTD Morning Show,” Ware told Greg Berg that she was initially elated to earn a highly-coveted berth on the NFL team’s cheerleading and dance squad. But she slowly soured on the job as management exerted increasing degrees of control, especially after she announced on social media that she'd been baptized and planned to "save herself for marriage."

Ware’s gender and religious discrimination suit, filed last year, has yet to be resolved.

In the interview, Ware was nearly moved to tears in describing the support she’s received. Ware will lead talkback sessions with the Carthage cast and audiences following the two performances.

Tickets are expected to be available at the door.