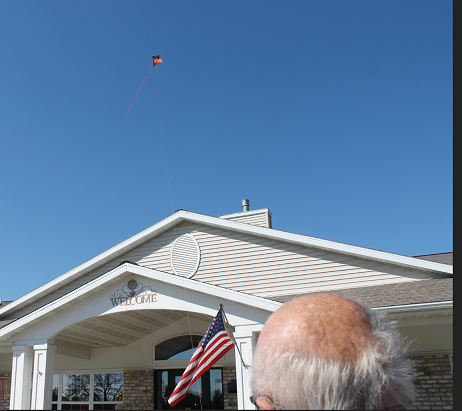 (WGTD)---Outdoor activities are understandably limited for many residents of assisted living facilities. At Kenosha Senior Living across the street from Gateway’s Kenosha campus, flying kites is one under-the-sun past time that’s still possible.

In fact, brightly-colored kites can be seeing flying overhead on a regular basis during the summer months, with small groups of residents taking turns holding on to the kite string.

Activities Director Bonnie Impola said the idea came to her and resident Louise Marsden a few years ago as they were using cheap kite kits from Walmart for a purpose other than flying. As an aside, Impola asked Louise if she thought the kite she built could fly. "Of course it would," Impola recalls Louise saying.

The first attempt didn't go so well, according to Louise. She says the kite broke free from the string and sailed away.

That summer, Louise flew a kite almost every day, Impola recalls. And she was joined by others, some in wheel chairs.

As a youngster, the 88 year-old Louise built kites with old newspapers then flew them with her brother in a field in Kenosha off of 45th St. near Holy Rosary--- before the church was built.

As for her neo-kite flying days, Louise says it makes her feel young again.