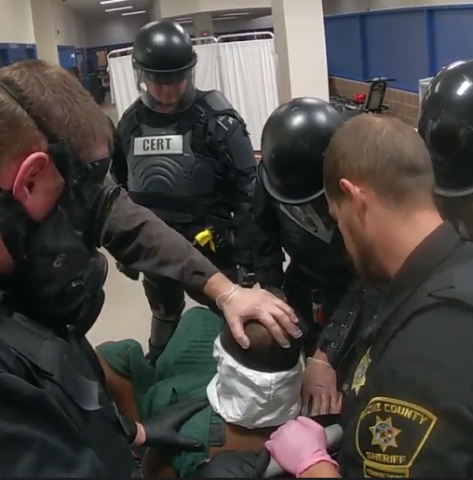 (WGTD)---The jailhouse death last summer of 27-year-old Malcolm James of Racine is being compared to the death of George Floyd by the attorney who’s representing the James family.

Attorney Kevin O’Connor spoke at a news conference Thursday that was held following the release of District Attorney Patricia Hanson’s decision not to file criminal charges against any of the Racine County jailers or the nurse who were present when James died.

In her report, Hanson indicated that she refused to accept the opinion of the Assistant Milwaukee County Medical Examiner who performed the autopsy at Hanson’s request. Jessica Lelinski ruled that James died of asphyxiation due to having his head pushed toward his chest while jail staff tried to remove a pair of taser prongs from James’ back.

"How can this happen in the wake of what happened nationally with George Floyd?" O'Connor asked. "This is exactly the same asphyxiation situation that we're dealing with again and again and again," O'Connor said.

In the Minneapolis case, a police officer was convicted of murder for holding his knee against George Floyd’s neck.

The Floyd incident was captured on cell phone video. James’ death can be seen in a jailer’s body cam video that’s now posted on the district attorney’s website.

In her 25-page report on the James case, Hanson, instead of endorsing Lelinski's conclusions, cites the opinions of two other experts who both said it’s more likely that James died as the result of cardiac arrest.

Attorney O’Connor rejects those opinions, and said Thursday it's highly unusual for a district attorney to second-guess the state’s own pathologist.

Kelly Scroggins leads Racine Women for Racial Justice. "This case is about Malcolm James but this case is also about every Black and brown individual that comes in contact with law enforcement, particularly the Racine County Sheriff's Dept. They're at risk," she said.

James was arrested last May after he lit his clothes and apartment on fire.

James had a history of mental issues. Once incarcerated, James started to bang his head against the padded cell wall on several occasions and refused to cooperate with jailers. Much of Hanson’s report details how jailers tried to calm him down and control his behavior.

James’ final moments—captured on that body cam video—show James continuing to resist then going limp after two minutes of having his head pressed down against his chest.

Hanson concludes that the jailers were following proper procedures, although a jail nurse was criticized for moving too slow once James became unresponsive. The contracted employee was fired within a day.

O’Connor says he plans to ask the U. S. Justice Department to investigate.