Woman Who Helped Jayme: 'All I Wanted To Do Is Get That Kid Safe' 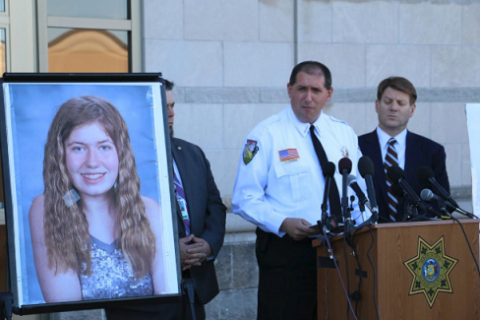 Jake Thomas Patterson, 21 Of Gordon, Has Been Arrested And Is In Custody For Murders, Kidnapping

(WPR/AP) ---Authorities have identified the suspect in the kidnapping of Jayme Closs and the murder of her parents as Jake Thomas Patterson, 21, of Gordon.

Patterson was being held Friday at the Barron County Jail on two counts of first-degree intentional homicide and one count of kidnapping.

He was arrested Thursday after Jayme escaped from a home in the Town of Gordon and gave Douglas County authorities a description of Patterson's vehicle.

Barron County Sheriff Chris Fitzgerald said Jayme was the target of the crime and that Patterson took steps to avoid being detected by law enforcement and the public.

Jeanne Nutter was walking her golden retriever Henry around a roughly two-mile loop of cabins near her home when she saw a young girl walking toward her wearing only a sweatshirt and leggings.

Nutter said it became clear as the girl came closer that she was Jayme, the 13-year-old girl that had been missing since her parents — James Closs, 56, and Denise Closs, 46 — were found dead Oct. 15 at their home in Barron.

When Nutter recognized Closs, Nutter asked her what kind of vehicle the person who took her was driving so they could be ready to run. The two then headed down the road to the home of a nearby neighbor, Peter Kasinskas.

The Kasinskas called 911 and wrapped Jayme in a blanket. When asked how the girl was doing, Nutter said, "She's a child who's been traumatized."

News of Jayme being found alive broke Thursday night after the Barron County Sheriff's Department posted the news to Facebook at around 8 p.m.

Douglas County Sheriff Tom Dalbec previously said Jayme was found between 4:30 p.m. and 5 p.m. Thursday in the Town of Gordon, which is about 45 minutes southeast of Superior and an hour north of Barron.

The investigation of the killings and apparent abduction drew in members of the FBI and thousands of civilian volunteers who showed up to help search the area surrounding the Closs home.

"All I Wanted To Do Is Get That Kid Safe'

Nutter is familiar with working with children and has a history working with child protective services in Dane, Clark and Eau Claire counties. She worked for the Wisconsin Department of Children and Families until she retired as a regional supervisor working on special needs adoptions.

Nutter said Jayme appeared "calm" and that everyone did a great job, including the dispatcher and law enforcement who arrived later to help. She didn't know how long it took for a sheriff's deputy to arrive, but Nutter said it "felt like days."

While they waited, Jayme petted the neighbors' dogs and Nutter's dog, Henry. Nutter said they just wanted to try to keep her comfortable.

"I just kept telling her, 'Everything is going to be OK,'" said Nutter.

The retired child protection worker didn't want to ask Jayme any questions because she didn't want to further traumatize the girl and knew law enforcement would have questions of their own.

"All I wanted to do is get that kid safe," she said.

Nutter said Jayme was likely in shock, and so were they. "I think we were just so amazed that she was alive," she said.

Nutter said Jayme is an amazing kid to have survived.

"I just did what I would expect any human being to do — to take care of a child," she said.

Oct. 15, 2018 - James Closs, 56, and Denise Closs, 46, are found shot to death in their home in Barron, a town in western Wisconsin. Authorities issue an Amber Alert for 13-year-old Jayme Closs, and the search for her begins.

Oct. 16, 2018 - Investigators say they don't consider Jayme a suspect in her parents' deaths. Authorities also dismiss a tip placing Jayme's whereabouts in Miami as "not credible," and say they believe the girl is in danger.

Oct. 17, 2018 - Authorities announce that investigators believe Jayme was in her family's home when her parents were fatally shot.

Oct. 18, 2018 - About 100 people join a ground search for Jayme after Barron County Sheriff Chris Fitzgerald requests the help of volunteers. The search turns up nothing useful. The Wisconsin Department of Justice announces it is sending therapists, comfort dogs and school resource officers to help students at the school Jayme attended.

Oct. 23, 2018 - About 2,000 volunteers from as far as Minneapolis help with another ground search. Several items are found and taken for assessment.

Oct. 27, 2018 - Funerals are held for James and Denise Closs in Cameron, a village next to Barron.

Oct. 29, 2018 - Prosecutors announce they have charged a man with burglarizing the Closs home but say he's not a suspect in the case.

Dec. 12, 2018 - Hundreds of people attend a "tree of hope" lighting ceremony in honor of Jayme in Barron.

Jan. 10, 2019 - Jayme is found alive in the Town of Gordon, a rural community about an hour from her home. A suspect is taken into custody.

Wisconsin Public Radio, © Copyright 2019, Board of Regents of the University of Wisconsin System and Wisconsin Educational Communications Board. The Associated Press contributed to this report. All rights reserved. This material may not be published, broadcast, rewritten or redistributed.