An Alleged Case of Police Brutality is Probed 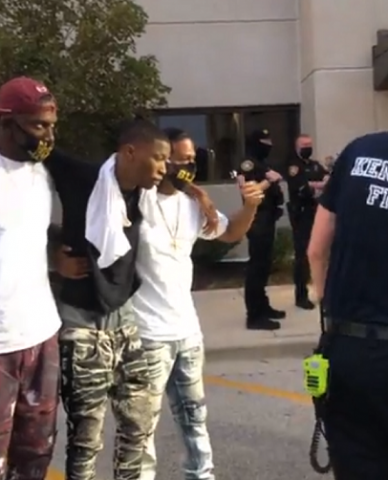 (WGTD)---A Kenosha Police Dept. spokesman said Wednesday morning that the department has been unable to verify the claims of a 20-year-old Kenosha man who said he was roughed up by police Tuesday afternoon.

Ramone Tidwell, through social media posts and friends and family, said he was stopped, pulled out of his vehicle, then released after officers apologized and said they had the wrong man.

Tidwell showed up at the Public Safety Building Tuesday evening to join others who were seeking an explanation from the department. Tidwell was later taken by rescue squad to a hospital for treatment of what appeared to be an ankle injury, according to social media video.

In an email Wednesday, Police Dept. Lt. Joe Nosalik said the department hasn't been able to substantiate the man's claims.

An attorney has advised the Tidwell family not to discuss details of the case with anyone.

Word of the incident first came up during the public comments portion of Tuesday night's Kenosha County Board meeting. The board had been expected to discuss a resolution outlining an action plan in response to the Jacob Blake protests and subsequent damage. But the resolution never made it out of committee after the meeting was abruptly adjourned due to a noisy disagreement over citizens comments.