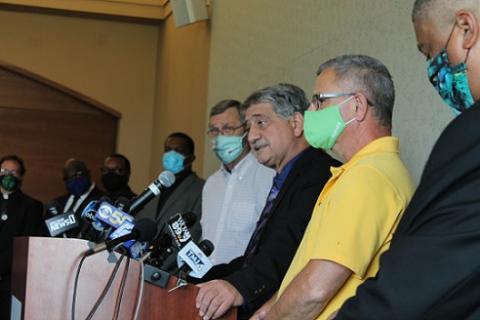 (WGTD)---A determined-sounding Kenosha Mayor John Antaramian pledged Monday to fix the problems that contributed to the recent riots that followed the police shooting of Jacob Blake.

Speaking to reporters in the Civil War Museum and surrounded by several city council members and community leaders, Antaramian announced a series of listening sessions. "We can make no changes without listening," Antaramian said. "That is going to be the key."

The first session will be held Sunday afternoon at Journey Church. Details are on the city's website.

He invited residents to hold him responsible to make sure things happen. But he said it'll take time. "I'm not going to sit here and tell everyone that oh gee this is going to be quick; that we're going to fix everything and it's all done tomorrow because if we start beleiving that then nothing is going to happen," he said. "This is a long-term process. We need to start today and we need to keep it going for the future."

As he mentioned in a recent one-on-one interview with Community Matters host Len Iaquinta, Antaramian said he and members of the clergy started to put together a process in the wake of George Floyd's death in Minneapolis, but he conceded that the parts didn't come together quick enough.

In the area of policing, Antaramian disclosed that he wants to move toward a community policing model that's been in place in Racine for a number of years. Antaramian also said, as he did on Community Matters, that another focus will be on police officer training.