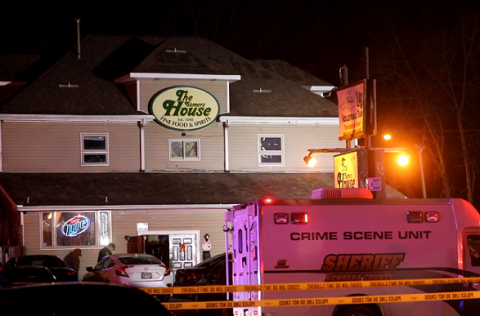 (WGTD)---An arrest has been made in connection with the shooting incident at Somers House Tavern early Sunday morning that left three dead.

A news release from the Kenosha County Sheriff's Dept. indicates that a suspect is expected to be charged with one count of 1st Degree Intentional Homicide, with additional charges possible pending further investigation.

The number of confirmed injured has risen from two to three, with the possibility of a 4th injured victim who has yet to be located by investigators.

The release says the investigation spans "several" crime scenes. Several vehicles have been impounded and investigators have examined video from a number of surveillance cameras.

Gunfire broke out inside and outside the tavern at about 12:45 a.m. It was preceded by one of the offenders being kicked out of the bar after some type of confrontation, according to what Sheriff Dave Beth said at a 7 a.m. news conference that took place near the scene. The man who was ejected from the bar returned with a gun.

Two of the fatalities were pronounced dead at the scene while the third man died after driving or being driven away in a private vehicle.

Beth said that more than one gunman may have been involved.

Numerous officers from surrounding communities responded to the scene and Sheridan Rd. was immediately closed down.

The identities of the victims have not yet been released.

At least some students were in the bar at the time of the shooting. In a social media post and in a message to WGTD, the mother of one of the students indicated that her daughter's group made it back to the dorms at Carthage safely. She said her daughter was too shook up to talk. Counselors were going to be made available, she said.

Investigators are looking for help from the public. The detective bureau's number is 605-5100. Information can be funneled anonymously by calling Crime Stoppers at 656-7333.

"There is no threat to the community at this time," the release said.

The investigation involves 7 law enforcement agencies and 8 fire departments, according to the release.