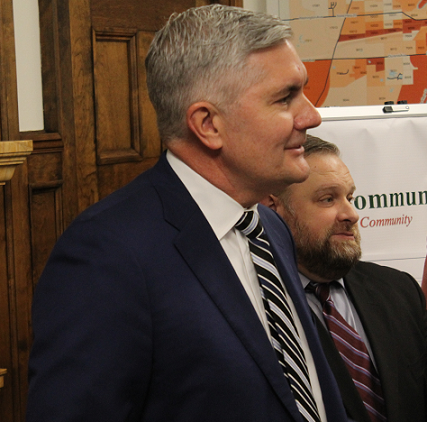 (WGTD)---Ascension Wisconsin will provide some of the seed money to open a health care clinic for uninsured and under-insured Racine County residents in the basement of Julian Thomas Elementary.

The announcement was made Friday morning in the office of Mayor Cory Mason.

Ascension market executive Bernie Sherry said the Catholic hospital chain will contribute $200,000 in each of the next five years. "This project aligns with our mission and purpose," he said to a gathering of several dozen people, including members of the board of directors of the Racine Community Health Center, the organization that has been spearheading the clinic's development over the past three years.

The clinic originally had hoped to start operations as a Federally Qualified Health Center, giving it start-up funds and higher provider reimbursement rates. But Racine was squeezed out of the running by other applicants.

Mayor Mason said having an up-and-running clinic will greatly improve the city's chances of gaining such status as more money becomes available.

Mason and all of the other speakers at Friday's announcement--including Racine County Executive Jonathan Delagrave and RUSD Superintendent Eric Gallien----praised the hospital for its contribution and noted the broad coalition that came together to get the clinic off the ground.

"We really came up with what we think is a fantastic model of co-locating this clinic in one of our schools," Mason said. "This is what community is all about."

The city, county and Gateway Technical College included $50,000 apiece in their budgets this year to help establish the clinic.

Other speakers included Shebaniah Muhammad, President of the RCHD Board of Directors, and Stephanie Sklba, Vice-President of Community and Government Relations for Gateway.

Mason said he's hopeful that other private entities will step forward in the future with additional support for the clinic, which is expected to open this summer.