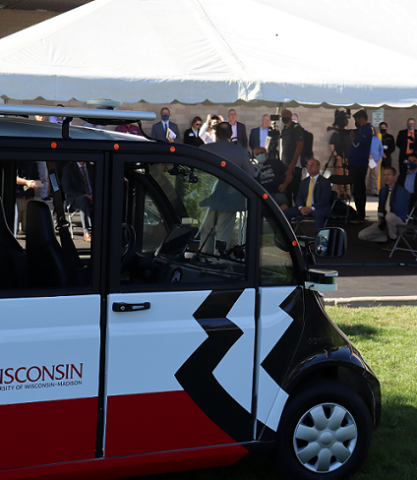 (WGTD)---Someday, as a result of an autonomous vehicle project officially launched Monday at Gateway Technical College in Racine, driverless shuttles could be part of Racine's transit system.

At least that’s the hope of Racine Mayor Cory Mason. "We are not yet to that point. It's certainly the ambition to get there at some point," Mason said at a ceremony held under a tent in a Gateway parking lot Monday. "But what we have here today is a research vehicle that is a project between the City of Racine, Gateway Technical College and UW-Madison," he said.

The red and white vehicle has been dubbed “The Badger.” To be stored on campus, the Badger will make its initial test runs in Gateway’s parking lot. Demonstration rides were given Monday after the speeches.

Speakers included state Transportation Secretary Craig Thompson, who said many ideas and applications will be tested, including technology designed to reduce vehicle crashes. "This sort of technology can have an immense effect on overall injuries and fatalities," he said.

Gateway President Bryan Albrecht viewed the project in historic terms, noting that the college is celebrating its 110th anniversary this year. "One of the very first things we did at Gateway 110 years ago was teach automobile traffic safety and driver education," he said.

Gateway students and faculty will play a big role in the project, working alongside students and staff from the UW-Madison Traffic Operations and Safety Lab, conducting test runs and analyzing data.

Mason said he hopes Racine streets will eventually become a learning lab that’ll draw attention from around the world. Racine was selected to be part of the UW collaboration in part because of its designation as a ‘Smart City’ two years ago.