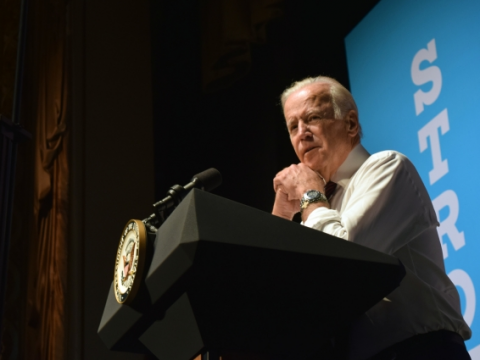 But the poll found Biden and the other leading Democratic candidates would face a very tight race with President Donald Trump if the election were held today.

Marquette's latest poll, which was their first of 2020, was conducted from Jan. 8-12. It interviewed 800 Wisconsin registered voters and had a margin of error of plus or minus 4.1 percentage points.

Rounding out Marquette's January survey were former New York City Mayor Michael Bloomberg and entrepreneur Andrew Yang, who were each the top choices of 6 percent of voters.

Nine percent of Democrats surveyed said they didn't know who they would support. Wisconsin's presidential primary is April 7.

Trump's numbers, on the whole, were similar to his long-term trends in Wisconsin with a job approval of 44 percent compared to 52 percent who disapprove.

Trump's numbers barely moved despite what many international observers saw as a seismic event on the global stage — the decision by Trump to kill Iranian Maj. Gen. Qassem Soleimani with a drone strike.

Even after the decision, Wisconsin voters' views of Trump remained largely the same, with 44 percent approving and 53 percent disapproving of Trump's handling of foreign policy. In December, those numbers were 43-54.

"I think the big story is not much is changing," said Marquette University pollster Charles Franklin.

Franklin said people's views of the Democratic presidential field would likely change after the Iowa caucus and New Hampshire primary, which are both in early February.

"That's why we can all look forward to Iowa and New Hampshire shaking up the race so that we have something new to look at next time," Franklin said.