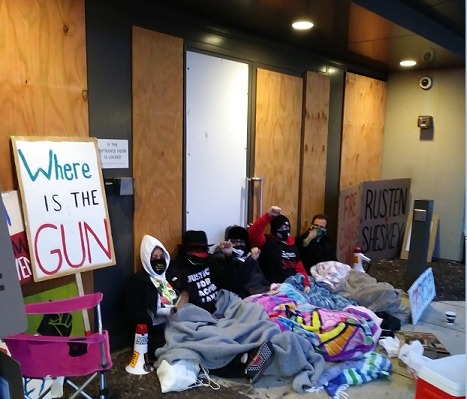 Blake's uncle, Justin Blake; former Kenosha County Board Supervisor Joe Cardinali and Rev. Jonathan Barker were cited for disorderly conduct after they and others blocked public access to the Kenosha Public Safety Building. Justin Blake is also facing a charge of obstruction,  presumably for failing to immediately identify himself.

The protesters were calling for the firing of Rusten Sheskey, the officer who shot Jacob Blake last summer. They also demanded a fuller explanation of the reasons behind Sheskey's reinstatement to the force following an administrative leave, and they were also asking questions about a service weapon Sheskey was given while on administrative leave. That gun either got lost or stolen but has since been recovered.

In a written statement, Miskinis said the department is open to "constructive communication" but will not respond to demands. He also said firing Sheskey was out of the question because it would equate to an "unlawful termination" because Sheskey did not violate any department policies, and his actions on the night of the Blake shooting were consistent with his training.

He goes on to say that the department routinely evaluates and enhances policies and seeks out additional training for staff.

In his own statement, Mayor Antaramian reminded the public about his "Kenosha Action Roadmap to Inclusion, Equality and and Equity." It's to address some of the concerns that were raised in the wake of George Floyd's death and the Blake shooting. The four-year-long plan calls for the formation of committees this spring that'll start out by conducting separate listening sessions on various issues. The city is also seeking to become a member of "My Brother's Keeper", a non-profit that was launched by the Obama Foundation.

He also takes a swipe at some of the leaders of the Blake protest movement in Kenosha, suggesting they should heed the same calls for greater accountability and transparency that they demand of the police department.

Meanwhile, the framework and mission of a new Kenosha County commission on racial equity will be debated by the leadership committee of the county board Tuesday evening.

A work group chaired by County Board Supervisor Jerry Gulley has been working on the details and has presented a four-page resolution to the board. That resolution calls for the Commission to launch a wide-ranging discussion and examination of policies and procedures that perpetuate systemic racism, with an initial focus on policing and law enforcement.

Under the resolution, the Commission would hold at least one listening session a year and present reports to the county board and county executive that would include findings and recommendations.

Tuesday night's meeting of the county board’s executive will be a virtual one, with citizens able to listen in via phone. Public comments are being accepted via email.

Creation of the county commission comes as committees formed by city administration are to explore many of the same issues that the county panel will apparently be addressing. But the timeline on the city’s process is spread over the next several years.