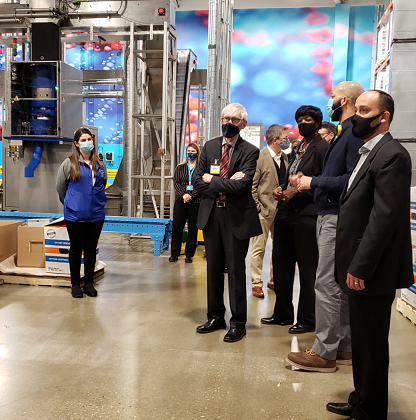 Gov. Evers toured the Pfizer distribution facility in Pleasant Prairie Thursday, It’s just one of two Pfizer centers in the country that are funneling doses of the COVID-19 vaccines to sites throughout the nation. While at the warehouse, the governor signed a bill that corrected a glitch that had prevented the Pfizer Pleasant Prairie facility from shipping vaccine to some states. The bill had been authored by State Sen. Van Wanggaard and State Rep. Samantha Kerkman. The pair represent Pleasant Prairie in the state legislature. The Pleasant Prairie plant center employs 115 workers, according to a news release from the governor’s office.

Word this week that the Kenosha police officer who shot Jacob Blake was reinstated last month without discipline did not mean that Rusten Sheskey had returned to patrol duties. According to a report from WISN TV, Sheskey is under investigation in a related matter. While on administrative leave as a result of the Blake shooting, Sheskey’s service gun was apparently stolen. That gun apparently had been given to him because Sheskey’s original weapon had been placed into evidence as part of the Blake investigation. A police department news release announcing Sheskey’s return from administrative leave makes no mention of the new investigation. Nor did it specify that Sheskey had not yet returned to patrol duty.

Kenosha County Public Health Officer Jen Freiheit is cautioning that data showing that white Wisconsin residents have been vaccinated at a rate twice that of Black residents may not be completely accurate. Freiheit said she discovered just recently that data on the race of people who got vaccinated in Kenosha County in some cases was being inputted incorrectly.  Freiheit says new inputting procedures have been implemented, and workers are trying to go back and correct any inaccuracies. She said she’s not sure just how prevalent the problem might be statewide. The deputy secretary of the state health department, Julie Willems Van Dyke, told WGTD News this week that she wasn’t personally aware of any data collection issues.

The Paddock Lake man who scuffled with a security employee at Woodman’s Market in Kenosha back in February appeared in court Thursday for an initial appearance. 53-year-old Benjamin Kunz was formally charged with battery and disorderly conduct. He’s out of custody on a signature bond. A pretrial hearing was scheduled for June. According to the criminal complaint, the confrontation occurred after the guard told Kunz he needed to be wearing a mask while shopping.