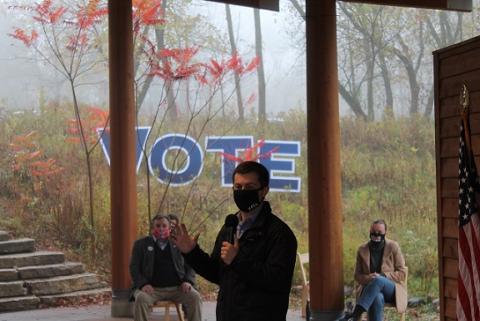 (WGTD)---Voters in Wisconsin have a greater degree of influence over the outcome of the presidential election than voters in nearly every other state. That's because Wisconsin is one of a handful of states considered political battlegrounds.

Former South Bend mayor and one-time presidential candidate Pete Buttigieg drove that point home while campaigning for Joe Biden in Racine Thursday afternoon. "You are in Wisconsin--the center of the political universe in so many ways right now," Buttigieg said at the River Bend Nature Center. "The power that every individual Wisconsin voter has right now is extraordinary and we've got to make sure that those who may be thinking about whether to bother to vote because they've been so frustrated with the system...that your moment of maximum power is the moment that you fill in that ballot."

Hillary Clinton lost unexpectedly to Donald Trump in Wisconsin in 2016 by fewer than 23,000 votes. It was Wisconsin and two other states with close margins that put Trump over the top.

Early on in the nominating process this year, Buttigieg was a Biden competitor in the crowded field, and was actually the front-runner coming out of Iowa and New Hampshire. He dropped out of the race on March 1st after doing poorly in South Carolina.

In Racine Thursday, Buttigieg spoke to a socially-distanced audience in an outdoor pavilion. He was introduced by Racine Mayor Cory Mason.

Earlier in the day, Buttigieg met with student leaders from Marquette University and UW-Milwaukee. In Green Bay, Buttigieg toured a micro-brewery and made remarks.

Meanwhile, the Trump campaign announced Thursday that the president will make his fifth visit to Wisconsin since August with an airport rally planned for Saturday in the conservative stronghold of Waukesha. Just last Saturday, Trump was in Janesville.

Numerous polls have shown Biden with a slight lead here.