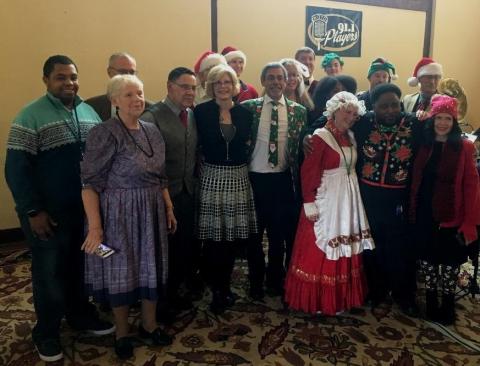 Admission is $15 per person, and includes a $5 discount coupon to be used the day of the show for a breakfast or lunch entree or buffet in the Frontier Restaurant or in the Lookout Bar & Eatery.

As always, the WGTD Radio Theater is written and produced by Steven Brown and Michael Ullstrup, both of Salem Lakes, Wisconsin. “We’ve been doing big Christmas shows at Lake Lawn for a number of years now," says Ullstrup. "Everyone likes a big show at the holidays, so that’s what we give them! The Dixie Dudes and Bill’s Little Big Band out of Antioch, Illinois will be providing the live music.”

Brown adds: “We change the theme for each season every year. For instance, last year, the theme for the 2018 season was World War II, so the show had a1940’s flair and we called it the “Stage Door Canteen.” This year, our theme has been detective stories, so we have detective characters in it. We’ll be featuring Stan Freberg’s ‘Christmas Dragnet,’ which is a parody of Jack Webb’s “Dragnet” series. We will also roll in a fun ‘Our Miss Brooks’ holiday episode.”

Our "Dean Martin" is Racine resident Joe Van Hulle, whose stage name is Joey Van.  Joey Van has worked every facet of the entertainment world, from concerts, conventions, state fairs and major cruise lines to top supper clubs. His television credits include national networks shows including the “The Merv Griffin Show.”

In addition, Joey performed for the 65th annual White House News Photographers Association, honoring President Ronald Reagan and First Lady Nancy Reagan. Because of the many singing and speaking voices Joey has impersonated over the years, he is usually billed as “Joey Van: A Man Who Hasn’t Been Himself Lately.”

Tickets for Saturday's show can be purchased at https://www.eventbrite.com/e/old-time-radio-show-the-detective-christmas-cavalcade-tickets-75037026767?aff=erelexpmlt