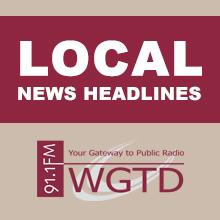 (WGTD)---Death investigations are underway in both Kenosha and Racine. In Kenosha, police and paramedics responded to a downtown residence Wednesday morning on a report of an unconscious person. The 18-year-old woman didn't have a pulse and she wasn't breathing. Life-saving efforts failed. In a news release, police said the death posed "no risk to the community." In Racine, a man found dead Tuesday morning in a house at 901. S. Memorial Drive has been identified as 18-year-old Demarcus Anderson. He'd been shot multiple times. Police are looking for 34-year-old Donley Carey. According to a criminal complaint, Carey thought the victim was a police informant and shot himk, then stuffed his body into garbage bags. Police said the house where the shooting occurred has a history of being used for private club-like parties.

(WGTD)---U.S. Cellular marked the beginning of its 5G service in Wisconsin with a ceremony at the Cesar Chavez Community Center in Racine Wednesday morning. It featured a video call made by Mayor Mason to students at Walden School. What does the advent of 5G service mean to average citizens? Not much, at least at the moment. But Mason, whose administration has embraced 'smart cities' technology, says a 5G platform allows the city to start talking about creating more efficient ways of doing business. Industries are also expected to benefit from the higher data speeds. U.S Cellular 5G-ready Samsun Galaxy phones are scheduled to go on sale Mar. 6th.