DOT Will Stick With Traditional Intersection Configuration at Hwys. 50 & 31. 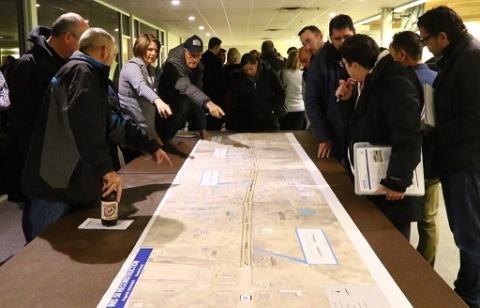 WGTD)---“Jug handles” won’t be coming to Kenosha’s most-busiest intersection after all.

The term refers to the type of intersection that’s designed to alleviate congestion by making smaller, sub-intersections a few feet away from the first. Drivers who want to go left first have to exit right, then get back on track by making another turn.

That type of intersection had been considered for Highway 50 and Green Bay Road as part of the Highway 50 reconstruction and expansion project. But at a public meeting on the project last week, project manager Jason Dahlgren said fresh traffic counts from the intersection gave the DOT second thoughts.

The DOT plans to stay with the more traditional type of configuration. However, a new access road to benefit businesses that are on the north side of Highway 50 east of Green Bay Road will be built. The street will run behind those businesses from 60th Ave. west to Green Bay Rd., giving the businesses and their customers a second access.

About 100 people showed up at Journey Church last week where preliminary plans for the four-and-a-half-mile long project were laid out.

Richard Yuspeh, owner of the shopping center at 50 and 60th Ave. that includes Pick ‘n’ Save, said he was there to get a closer look at plans for that intersection. He said a new turning lane will take away 10 parking spaces from a small out lot building that has several tenants. Yuspeh said he didn't see anyway to lessen the impact on the businesses that are there.

The Highway 50 expansion and reconstruction project is expected to begin a year-and-a-half from now.