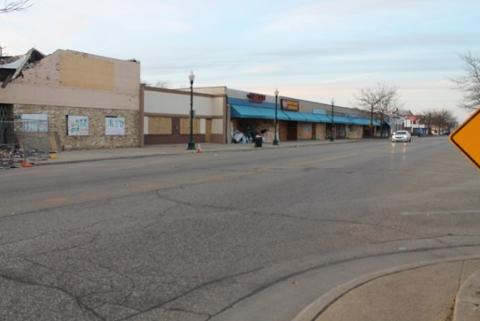 (WGTD)---A small, uptown ethnic grocery store that was put out of business by the arson fires in late August could become a major tenant of a mixed-use development that's been proposed to replace the 22nd Ave. strip retail center that was badly damaged. In doing so, the grocer could help fill a major need in the neighborhood.

Representatives of Gorman & Company and the Kenosha Area Business Alliance have been collaborating with the family that owned La Estrella Supermarket and the Uptown Restaurant.

A version of the Hispanic grocery store and restaurant could conceivably be combined to fill between 10,000 and 20,000 sq. ft. of space in the 16,000 sq. ft. first floor footprint of a four-story building Gorman has planned. The building's upper floors would be set aside for apartments.

Gorman is proposing a second, smaller mixed-use building that would front on 23rd Ave.

Even before last summer's fires--one of which was accidental--the neighborhood had been struggling with a lack of grocery store options. La Estrella helped fill the gap when the nearby Pick 'n' Save closed several years ago.

KABA, which has been tracking all of the displaced business tenants, funded an uptown grocery store market study. Although it found the typical full-service grocer probably wouldn't be successful in the neighborhood, a smaller store quite possibly could be.

The study was conducted by Associated Wholesale Grocers, a company that supplies independently-owned stores. It also has a distribution center in Kenosha.

Working with La Estrella as a potential tenant for the Gorman project has advantages because the family already knows the market. In addition, the store's chances of success are boosted by the increased customer base that's presented by Gorman's plans for 128 apartments.

Gorman's proposal is on a fast track. The company was given preliminary approval by the city's Plan Commission last week, enabling it to begin applying for tax credits that if secured would help to keep rents low for both residential and business tenants and increase the financial viability of the project.

The next steps include further research. Associated Wholesale Grocers is expected to remain in the picture, at least for now, in that the company could provide additional support, Wessling-Grosz said.

Gorman is the company that saved the former Elk's Club building in downtown Kenosha from the wrecking ball by turning it into a full-service hotel.