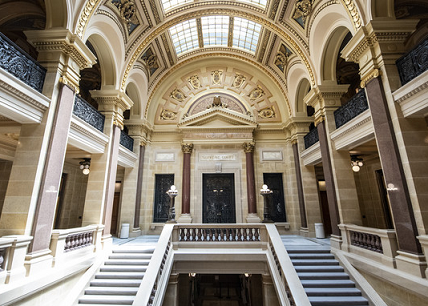 (WPR)---The Wisconsin Supreme Court has affirmed the state Department of Natural Resources has the authority to place permit restrictions on large livestock farms and high-capacity wells in order to protect the state’s water.

The pair of court decisions issued Thursday go against the state Legislature’s arguments that a 2011 law limits state agency authority to what is explicitly required or allowed under state law. The Legislature chose to intervene in the two cases earlier this year.

In the first case, Clean Wisconsin and a group of Kewaunee County residents challenged the DNR’s approval of a wastewater discharge permit for Kinnard Farms to expand its concentrated animal feeding operation, or CAFO, by adding a second site and more than 3,000 dairy cows.

The case goes back to 2012 when Kewaunee County residents asked the DNR to review its approval of Kinnard Farms’ permit because it did not require groundwater monitoring or set limits on the number of animals. In 2014, an administrative law judge ordered the DNR to implement the two permit conditions, citing "a crisis with respect to groundwater quality in the area."

But DNR officials under former Gov. Scott Walker reversed that decision, saying the 2011 law, known as Act 21, prevented them from imposing permit restrictions.

In Wednesday’s state Supreme Court decision, written by Karofsky, the majority found the DNR "had the explicit authority" to impose both permit conditions in order to "assure compliance" with limitations on discharged waste and groundwater protection standards.

An attorney representing Kinnard Farms declined a request for comment on the decision but shared a written statement from the company.

"Although our family is disappointed with the Wisconsin Supreme Court’s decision, we respect the Court and its holding. Our family remains committed to producing high-quality, nutritious milk and renewable natural gas while going the extra mile to protect our precious land and water resources," said the statement from Kinnard Farms.

In the second case, filed in 2018, Clean Wisconsin and the Pleasant Lake Management District contested the DNR's approval of eight high-capacity well applications made by farmers in the Central Sands region between 2014 and 2015.

After originally putting the applications on hold because of their potential environmental impact, the DNR approved the wells following a 2016 opinion by former Republican Attorney General Brad Schimel that the agency did not have the authority to consider the collective impact of new high-capacity wells based on Act 21. That opinion contradicted a previous Supreme Court ruling know as the Lake Beulah decision that found the DNR does have the authority and responsibility to consider the broader environmental harm of a high-capacity well to waters of the state.

Dallet wrote in the court’s opinion that Act 21 did not change the Lake Beulah decision because the state Legislature "has granted the DNR the broad but explicit authority to consider the environmental effects of a proposed high capacity well."

Evan Feinauer, staff attorney for Clean Wisconsin, said the decisions will not only affect the facilities involved in the cases but solidifies the DNR’s authority to protect waters from pollution or from overextraction when issuing permits.

"The court clearly today said that, at least in these cases, that law, Act 21, does not limit DNR’s authority," Feinauer said. "That's a really important principle to now have some clarity on moving forward. Because that could apply to a whole range of permitting operations by DNR and frankly a whole range of agency actions beyond the natural resource realm."