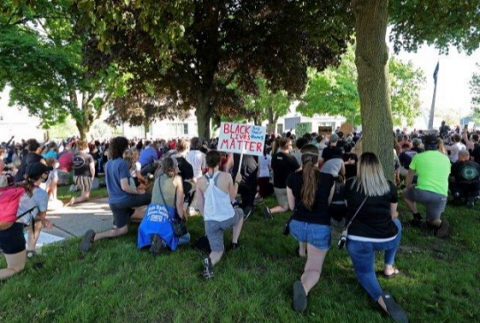 (WGTD)---A peaceful protest in a downtown Kenosha park ended Tuesday night with the some in the crowd marching through the downtown area then dispersing. Demonstrators called for justice in the Minneapolis police-custody death of George Floyd and an end to systemic racism.

Demonstrators knelt down on one knee for nine minutes, the amount of time that Officer Derek Chauvin's knee pressed against Floyd's neck. 23-year-old Karen Meza said she wanted to participate in the protest because simply expressing one's view on social media sometimes isn't enough. "When I was kneeling down for 9 minutes the thought that ran through my head was wow this is a really long time," Meza said. "I noticed I had to switch knees. And I kept thinking how can someone stay on someone's neck like this for such an amount of time."

27-year-old Justin Denney thought about the African-American students he teaches in an after-school program at Wilson Elementary. "My heart breaks for what systems in this country can do to them," Denney said. "And I want to see them to grow up and flourish. And I know they're not on an equal plane to their white neighbors," he said.

Also in attendance Tuesday night was Kenosha County Sheriff Dave Beth. Beth said he was sickened by the actions of Chauvin, and even more appalled by the three officers who were seen on video doing nothing to intervene. "All of us in law enforcement--you get in situations--the adrenaline kicks in and sometimes you need an outside force to come in and help you separate what's going on," Beth said. "That should've happened in this case but it didn't."