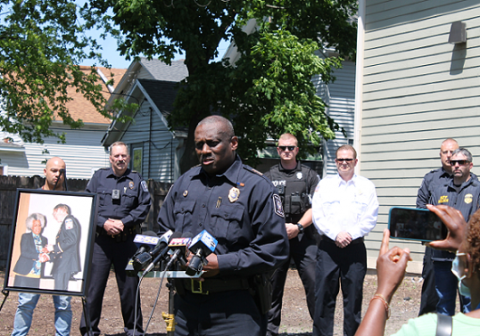 At least one protest is scheduled for Racine Tuesday night, while two head-to-head demonstrations are scheduled near the Kenosha County Courthouse.

A Facebook page group called "Kenosha Guard" is hosting one event titled "Peaceful, Armed, Assembly to Deter Looting/Rioting. Another event, "Kneel for Nine", will be taking place nearby. Both events are scheduled to start at 5:30.

Emotions, as displayed on social media, are running high.

The "Kenosha Guard" event is scheduled to end at 10, even though the city's curfew goes into effect Tuesday night at 8. "That curfew will be enforced if need be," said Kenosha Police Dept. Lt. Joseph Nosalik.

When asked what advice he had for people planning to attend either demonstration, Noslik had two words--"Stay home."

The same advice was given by Racine Police Chief Art Howell at a news conference held Tuesday to announce an arrest in the arson case at the Thelma Orr Community Options Policing House.

Howell urged peaceful protesters to be on guard against infiltrators. "No matter how good your intentions are if you create an environment where someone with bad intentions can infiltrate a group with good intentions...no one is going to know the difference," he said.

Howell expressed relief that the man arrested In the COP house arson was not from Racine, saying the house, bearing the name of the beloved, Racine civil rights leader, would not be viewed as a target by anyone who knows the history of Racine and Orr.

Charges are expected to be filed Wednesday, with other arrests to follow, he said.

Mayor Mason is urging everyone to hold silent protests at home at 6 p.m. by either kneeling for nine minutes or burning a candle. Church bells are expected to ring in the city during that time.

At least one other protest is scheduled to begin in Racine at 6. It's to begin at 10th and Main, and is sponsored by several groups including Racine Interfaith Coalition.

For the second night in a row, the City of Racine will have a curfew in effect beginning at 10.

Kenosha Mayor John Antaramian issued a statement Tuesday urging people to remain peaceful and pledging to form a group of clergy and others to address systemic racism. "People have a right to demonstrate--peaceful demonstration is the way this country has always worked," Antaramian said. "It is not OK to destroy people's property and riot. Rioters and looters need to be held accountable for their criminal activities."