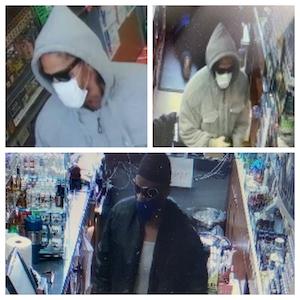 Kenosha Police are looking for two men who robbed a convenience store at mid-morning on October. 7th. Arya's in the 1900 blk. of 22nd Ave. was the target. Anyone with information is asked to either call police or Crimestoppers at 262-656-7333.

A 63-year-old man who confronted a motorist on Sheridan Rd. in Kenosha near La Fogata Mexican Grill Monday evening and fired a shot has been arrested. Police said the man was taken into custody after officers tracked him down to a home on the city's north side. The arrest wasn't easy--the man surrendered only after three hours of negotiation and after the Kenosha County Tactical Response Team was called in. The initial confrontation was captured on cell phone video. It shows a van crashing into another vehicle, which then drives away to gain some distance from the first vehicle. The gunman gets out, starts yelling, points a gun in the direction of the other drive and fires a shot.  No one was injured.

A 20-year-old man appeared in Kenosha court Tuesday and was formally accused of being the driver in a high-speed chase that reached speeds of 100 miles per hour. The pursuit occurred on south Sheridan Rd. Sept. 28th. Officers terminated the chase for safety reasons.  According to the criminal complaint, Ontario Williams was eventually identified as the driver in a video from a gas station's security camera. The stolen vehicle was believed to have been involved in a pair of weapons complaints from four days earlier.

Three juveniles were arrested early Saturday morning just moments after they stole a car in the Whitecaps neighborhood. Police spotted the vehicle and gave chase. The suspects were apprehended while walking in the area. On Monday, members of the Kenosha County Dive team recovered some evidence in the case from a retention pond in the area.