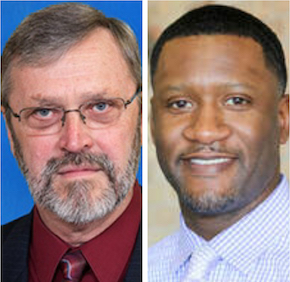 (WGTD)---It’s a slow recovery from last year’s destruction, but progress is being made in Kenosha’s Uptown. The area was hit by the arsons and vandalism in the wake of the Blake shooting, and, a few weeks earlier, an accidental fire that destroyed a two-story building of storefronts and apartments.

Speaking on a recent edition of Community Matters, activist Brandon Morris outlined the largely unheralded efforts of Uptown residents who’ve been meeting regularly. "These sub-teams have all had the goals in mind and they have been working diligently since the year started," said Morris, who's employed as Community Engagement Manger for the non-profit, Building Our Future. "I think it's been a beautiful thing and a beautiful way to engage neighbors from the Uptown area as well as the rest of the Kenosha community," he said.

They’ve been tackling a variety of issues such as mental health awareness and promoting COVID vaccinations. They’ve also helped to organize a Juneteenth celebration and the Lincoln Park concert series.

Appearing with Morris on Community Matters was Jan Michalski, who represents much of the Uptown on the city council. For his part, he cited some brick and mortar projects, including Gorman Development’s mixed-use project of storefronts and apartments that'll take the place of a row of damaged structures on 22nd Ave. "There are a lot of things that are planned in the city. Of course people are impatient," Michalski said. "There are things that are moving and there's a lot of investment in there. Hopefully that will inspire more investment in that area," he said.

Other examples of progress include the city’s purchase of the former Brown Bank for use as a training center and offices for various non-profits, as well as some preliminary talk of building some type of innovation center on an empty lot at 22nd Ave. and 63rd St.

Morris, however, said some residents remain skeptical, even though officials have vowed not to price out residents and existing businesses. "If it's true that there's not going to be any gentrification going on then I think that needs to be spread to the folks that live there, work there and play there," he said.