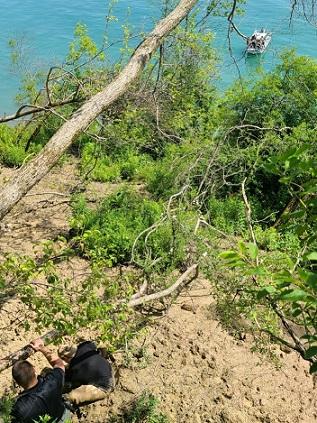 (WGTD)---A 26-year-old man who'd been walking along the top of a muddy, Lake Michigan bluff in Caledonia slipped off the edge Tuesday morning and had to be rescued.

Dillon Armstrong, who'd been exploring Cliffside Park, wound up stuck in a muddy hole up to his thigh about seven feet below the top, according to a news release from the Racine County Sheriff's Dept.

Armstrong was able to call 911, but then his phone died, leaving authorities unsure of his exact location.

The Sheriff's Water Patrol responded, as did the training division, which was on a separate assignment.

Nearly an hour after the call came in, Armstrong was located. A deputy was lowered by rope and began to dig him out. He was eventually pulled up.

Neither Armstrong or any of the deputies involved in the rescue were hurt.