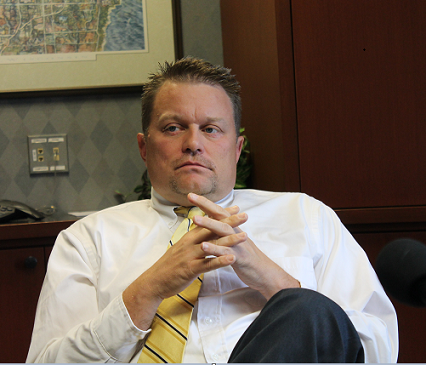 (WGTD)---Racine County Executive Jonathan Delagrave wants to expand the use of crisis workers in responding to emergencies that might ordinarily start with an initial call for law enforcement.

In his recommended budget for next year, Delagrave is proposing to spend $400,000 to hire four more crisis counselors, and train dispatchers to make better decisions on when to send a counselor, law enforcement, or both. “There are times when we get caught up in a law enforcement mechanism when things could be diverted through mental health services,” he said at a budget briefing for reporters last week.

Delagrave says the initiative is patterned after a successful program that’s underway in Eugene, Oregon.

Delagrave says if it works here, the project could be expanded.

Meanwhile, Delagrave is pressing ahead with plans to build a youth detention center in Caledonia over the objections of some people who live near the site.

The $43 million Youth Development and Care Center would replace a facility currently located at the Kornwolf Service Center on Taylor Ave. in Racine. It would hold about 50 young people from Racine, Kenosha and several other counties. Most of the cost of construction would be covered by the state.

The county initially wanted to build near the existing detention facility in the city. But opposition from the city council, as well as a subsequent $5 million estimate for environmental clean-up, prompted the county to look elsewhere.

The new preferred site is in Caledonia on the northeast edge of Batten Airport.

Several dozen residents spoke out against that location at a public meeting held this past summer.

Delagrave was asked whether the Caledonia Village Board can be counted on to support the project despite the objections. “What I can tell you is they recognize the importance of this project for our youth,” he said, adding that some of the complaints from neighbors over design and site plans have been addressed.