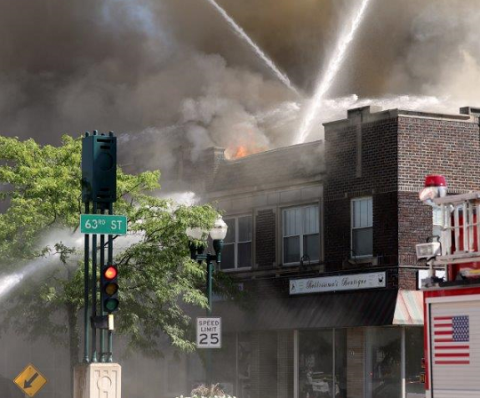 (WGTD)---A building that stood for over a century in Kenosha's uptown area was heavily damaged if not destroyed by fire Wednesday morning.

The brick building on 22nd Ave. along 63rd St. had shops on the first floor and apartments on the second.

Firefighters responded to one of those businesses--a record store--just before 8 a.m. "I heard yelling outside to get out and it woke me up," said Carry Owens who'd been sleeping in an apartment above the record store. "I looked out the window and I'm seeing smoke come up by the window. I got up, got dressed and ran outside," she said.

Minutes later, Owen's boyfriend returned home from his third-shift job. At first, the fire seemed to be minor. "It just looked like a small fire that they had under control," said Gregory Draper. "Then the roof started smoking real bad and then it really escalated into a big flame," he said.

Fire Chief Charles Leipzig said the fire got out of hand once it made its way into the building's attic.

Firefighters were ordered out of the building, and the blaze was fought by firefighters manning hoses from the street and from three aerial ladder trucks.

The blaze was brought under control four hours later. While the brick shell of the building still stood, the building was declared a potential total loss. "There's no roof left," Leipzig said.

The only injury was to a man who tried to put the fire out himself--he may have been the owner of the record store,  Leipzig said. The man was taken to Aurora for treatment. His condition wasn't immediately known.

Fire departments from as far away as Fox Lake, Illinois were summoned to help out.