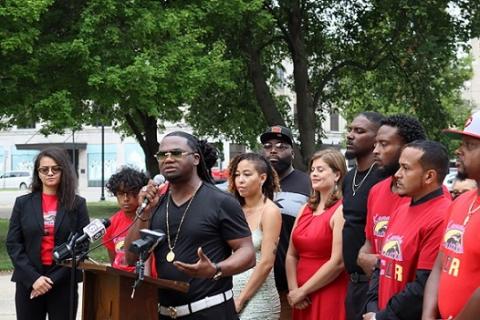 (WGTD)---A new group has formed to try to reduce violence in Kenosha while at the same time addressing the issues that often times foment such behavior.

A cornerstone of Kenosha Coalition Organizing Resolution or KCOR for short is sending volunteers who are trained in mediation and self-defense into neighborhood hot spots.

Leaders of KCOR unveiled their plans at a news conference at Civic Center Park Wednesday.

Caliph Muab ‘El says he anticipates that KCOR will serve as a conduit between residents and police. "We can't go around them (the police). We can't avoid them. But it's best for us to get an understanding on both sides so we don't have another Jacob Blake," he said. Muab 'El is executive director of a Milwaukee-based mentoring group called "Breaking Barriers."

KCOR is an outgrowth of discussions with Mayor Antaramian and Interim Kenosha Police Chief Eric Larsen, who was at the news conference. He said similar groups in other cities have produced positive results. "It's simply mediation in the community to prevent violence."

KCOR volunteers are currently walking through some of the neighborhoods to introduce themselves. The group’s 24-hour hotline is 608-617-3231. About two-dozen volunteers have been trained in meidation, trauma-informed care and self-defense.

KCOR already has at least one success story to report. At the news conference,  Alder Anthony Kennedy described how he called KCOR for help last weekend after spotting an unusually large and potentially menacing gathering in his district. KCOR sent over two volunteers and the three walked into the crowd, allowing Kennedy to introduce himself and the KCOR volunteers to explain their mission. The volunteers gave two young people rides out of the area and the evening ended peacefully.

Muab 'El said KCOR represents a new way of trying to control violence. "We can't arrest our way out of the problem," he said. But he warned that violence can't be completely eliminated unless disparities that currently exist are rooted out.