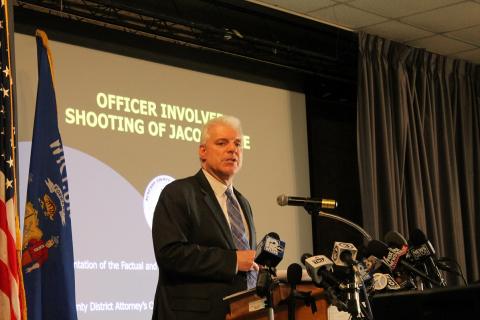 Speaking from a wheelchair, Blake said he'd been planning on surrendering after fighting with police and ducking into a vehicle with his three children sitting in the back.

Although Blake maintained he wasn't a threat to Rusten Sheskey, the officer who shot him, another officer who'd been standing a few feet away told investigators that Blake had a knife in his hand as he started to turn toward Sheskey from the driver's seat.

Former Madison Police Chief Noble Wray, who'd been hired by the county to examine the case, ruled that the use of force was justified, given the totality of circumstances. Graveley announced two weeks ago that Sheskey would not be charged in connection with the shooting.

At last report, Sheskey remains on paid administrative leave, along with the other two officers who initially responded to what was described as a domestic violence call.

An attorney for the Blake family said some unspecified type of legal action is planned.

The U.S. Attorney's office still has open a civil rights investigation into the matter.