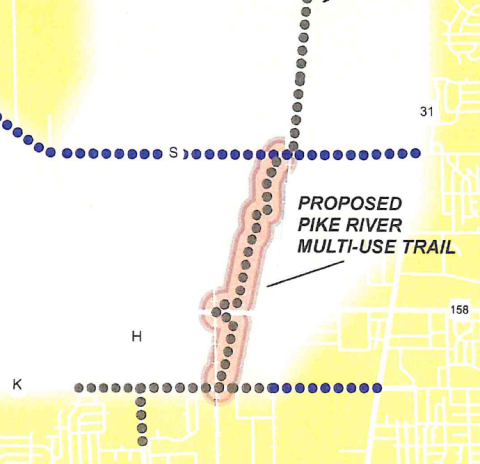 (WGTD)---Kenosha County Executive Jim Kreuser’s budget proposal for the coming year includes funding to revitalize a two-mile-long stretch of the south branch of the Pike River.

In addition to improving the river’s flow and reducing erosion and runoff, the project would include the construction of a bike path that would link to other trails, connecting neighborhoods in the city, Somers and Pleasant Prairie. "It's connecting neighborhoods, the town and the village, and cleaning up a major part of the river that will help the drainage," Kreuser said during a review this week of his budget proposal for next year.

The section of the river in question runs from highways ‘S’ to ‘K’.

Kreuser is asking the county board for authority to borrow $5 million over a two-year-period.

The Army Corps of Engineers, the entity that would do the work, has already committed $10 million for the project, a pledge that wasn't expected to come for a few more years. Kenosha County's project was pushed up the list after projects put forth by a couple of other local governments weren't ready, Kreuser said.

Much work has already been done on the Pike as it moves through Kenosha and Racine counties on its way to Lake Michigan. One current project involves the restoration of the river in Petrifying Springs Park in Somers.