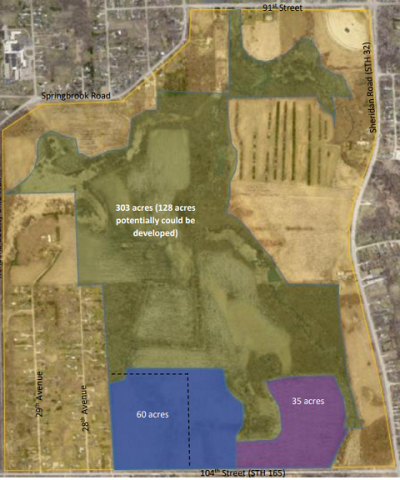 (WGTD)---Kenosha-based Bear Development is in the business of building things. In this case, the goal is preservation.

The Mills family has decided to set aside some 400 acres of mostly unbuildable land in southeastern Pleasant Prairie for use as a highly-regulated, wetland mitigation bank, one of just a few such preservation areas in southeast Wisconsin. The village’s plan commission approved the project last week.

The company plans to spend $4-$5 million to restore the land to its original state. It’ll be able to recoup the cost by selling wetlands mitigation credits to developers whose projects elsewhere have unavoidably destroyed protected wetlands. "The goal is not to have somebody in Baraboo buying credits in southeast Wisconsin but to have somebody in Pleasant Prairie or Kenosha in this watershed area that actually buys these credits back from us," said Bear Development C-E-O S.R. Mills at the commission meeting.

Village Development Director Jean Werbie-Harris says village officials are all for the project. "We think it's a wonderful opportunity to preserve a large, expansive area that has a lot of environmental features--wetlands and wildlife habitat," she said.

The preservation project does come with a cost to the village. It won’t be able to recover about $500,000 in sewer connection fees it figured on collecting when it extended sewer service to the area.