Popular Corner Grocer is Lost, But Firefighters Save a Neighboring House 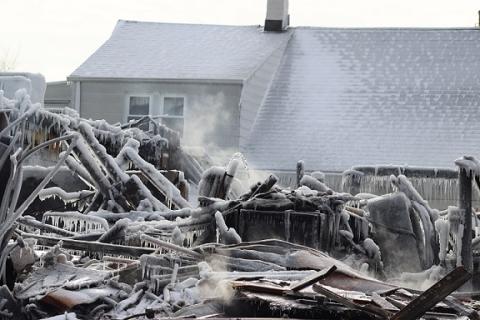 (WGTD)---While a popular neighborhood grocery store in Kenosha lies in ruins, firefighters were able to save a duplex located immediately south of the uptown area store.

Kenosha Fire Chief Christopher Bigley calls that no small accomplishment, given the difficulty in fight the huge Wednesday night blaze. "That was an excellent save on the part of the firefighters who were there," said Bigley, adding that at one point flames were shooting over the top of the two-story house. The duplex sustained little if any damage, he said.,

The wind-whipped fire that destroyed Model Market was hard to fight because of the extreme cold and low water pressure in the older neighborhood.

The century-old grocery store—run for many years by the Del Frate family—included several apartments on the second floor.

No injuries were reported.

The cause is under investigation. Initial reports indicated that it was an oven fire.

20 off-duty firefighters were called in so that personnel could be rotated in and out of the fire scene. In addition, firefighters from six to eight outside departments were summoned in order to man empty Kenosha firehouses.