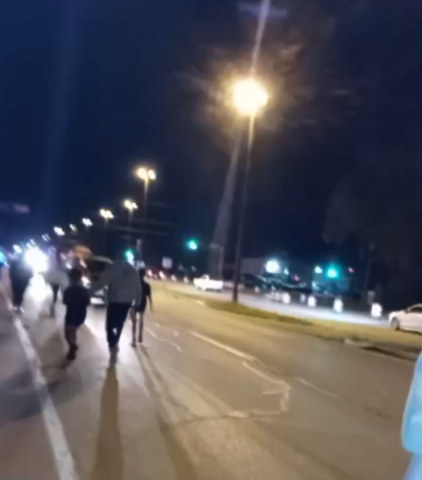 (WGTD)---A group of marchers fighting for racial justice passed through Kenosha Tuesday night just as the County Board was debating a resolution promoting racial equality.

Supervisor Laura Belsky's resolution that declares racism to be a public health crisis passed 18-1. "The core of this resolution is to bring uncomfortable discussion of racism to the table and not fool oursevles that it does not exist," she said.

The resolution  commits county government to examining its own policies and procedures, and supporting efforts at the state and federal level that advance social justice.

At the very moment that county board supervisors were debating the resolution and several amendments, a community activist from Milwaukee was leading a group of demonstrators through Kenosha.

Frank Nitty and his supporters were in the first day of a planned march to Washington D.C.

On 22nd Ave. near 71st St., trouble broke out. "A guy came out of his house and screamed 'go to hell' at us then he went back inside and came out with a rifle," said former Kenosha School Board member Kyle Flood who was part of the march and was streaming it live on Facebook.

Police officers who’d been escorting the group through town quickly converged on the house and grabbed the gun, then hustled the man back into his house, presumably for a chat. There was no immediate indication that he was arrested.

The march continued south on 22nd then on Sheridan to Zion, where demonstrators planned to spend the night.
-0-