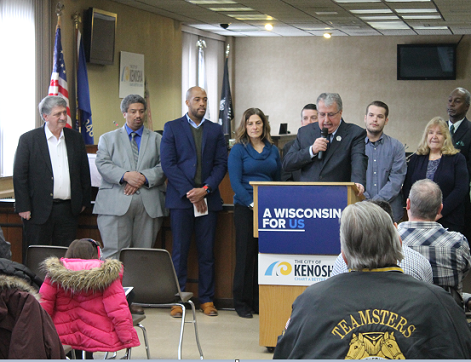 (WGTD)---Lt. Gov. Mandela Barnes was the main speaker at an event in the Kenosha Municipal Building Monday as he and Gov. Evers fanned out across the state to promote the creation of Evers' "People's Maps Commission."

The commission, created by an order signed by Evers a couple hours earlier in Madison, aims to create a non-partisan panel to redraw the legislative boundaries after this year's census is completed.

Maps drawn ten years ago by the Republican-controlled legislature and signed by former Gov. Walker, a Republican, were designed to maximize the number of Republican legislators elected to office. Two years ago, Democratic Assembly candidates received some 200,000 more votes than did Republicans. Yet Republicans hold a 63 to 36 majority in the lower house.

At the Kenosha event, Barnes said the commission's work will by compared to new maps drawn by Republicans, should they retain control of both houses of the legislature this fall. "We know that fair maps will provide the equal representation that everybody in this state deserves," Barnes said. "And fair maps as we know mean that elected officials will truly be held accountable when they fail to act on pressing issues like climate change, Medicaid expansion, universal background checks and medical marijuana," he said.

Even though the commission will draw up a set of maps, final authority still resides within the legislative branch. Democrat Evers, however, would be in a position to veto any maps that are sent up from lawmakers.

Also speaking Monday was Kenosha Mayor John Antaramian. "We have lost so much in this country because of the lack of doing redistricting fairly," Antaramian said. "It does not matter what party you belong to," he said.