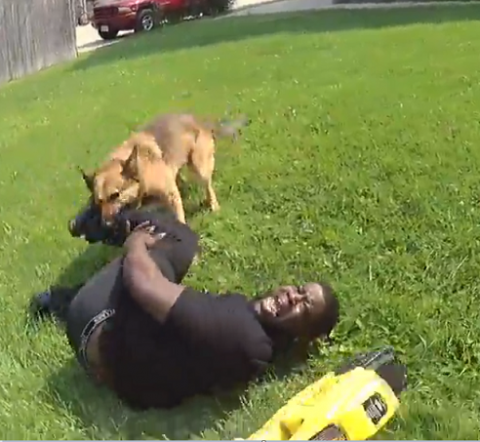 (WGTD)---A new group dedicated to exploring racial issues in the criminal justice system in Racine County is demanding to know why no action has been taken against a deputy who repeatedly tazed and allowed his patrol dog to bite a suspect even though the man had surrendered.

Body-cam video of the 2018 incident was played at an event Thursday held by Racine Women for Racial Justice. The group, which has over 1,000 members, was formed after the death of George Floyd.

"The video is a little hard to watch especially if you have experienced racial trauma--if you have had any kind of a negative encounter with the police or with the sheriff's department, " said the group's executive director, Kelly Scroggins. "But it has to be seen. People need to know what's going on in Racine County," she said.

The video is part of a federal court lawsuit that was filed in March against the sheriff's department and deputy Edward Drewitz by an attorney for Deandre McCollum. The incident began after McCollum drove off after Drewitz tried to stop him for having tinted windows. McCollum crashed into a parked vehicle then took off on foot.

The video shows Drewitz's dog chasing after McCollum and eventually bringing him down by biting his leg. After being tazed, McCollum rolls onto his stomach as directed and repeatedly pleads with the deputy to call off his dog. "He won't stop," McCollum says in pain. McCollum is eventually handcuffed, but Drewitz again releases his dog after McCollum, still on his stomach, tries to lift up his body.

He's doing so because he's trying to breathe, said his attorney, William Sultan, at Thursday's presentation. McCollum is struggling to breathe because the single set of handcuffs that were used were too tight, Sultan said. Normally two sets of handcuffs are used on larger individuals.

The lawsuit alleges excessive force, a contention that attorneys for the county denied in a court filing.

Sultan says the video clearly shows that McCollum, after being bitten, tazed and handcuffed, posed no threat and should not have been subjected to additional tazes and dog bites. "Deputy Drewitz did this because he wanted to punish Mr. McCollum," said Sultan.

Scroggins says the group will try to get answers from Racine County Sheriff Christopher Schmaling and plans to take the issue to the Racine County Board. Only one supervisor--Nick Demske--was present Thursday even though all 21 board members were invited, according to Scoggins.

McCollum is scheduled to be released from prison within a few weeks after serving time stemming from the 2018 incident and from an earlier case in which probation was revoked.

In addition to highlighting cases like McCollum's, the group plans to offer assistance to pre-trial defendants who may need help. The initiative also plans to push for changes in the criminal justice system.