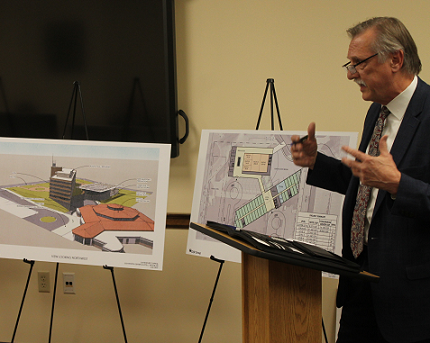 Dallas-based Gatehouse had originally proposed building the complex to the south of Festival Hall. But the state Department of Natural Resources balked at allowing the city and developer to use a portion of the lakebed for private gain. So the site was moved to the other side of Festival Hall.

The plan has Gatehouse funding the construction of the hotel, with the city financing a large expansion of Festival Hall that would be tied directly to the 170-room, six-story hotel.

The plan that was recommended for approval Monday night calls for the city funding its share of the borrowing through a complex combination of tax incremental financing, room tax receipts and convention center lease payments from Gatehouse.

City Administrator Jim Palenick said the project would "arguably be the most impactful economic development project the city has seen in 50 years."

Ald. Sandy Weidner, who was in the audience for the meeting, laughed out loud when she heard that, adding that the same had been said for the defunct Machinery Row project that had been proposed for a strip of land along the Root River.

Palenick, who reminded Weidner that he wasn't employed by the city during those discussions, didn't back down. "You've got a legitimate developer with real money that has done these projects in multiple locations around the country and is committed to this and is ready to go," he said.

The key to the project's success is the 35,000 sq. ft. expansion on two levels of Festival Hall, creating the right conditions to attract medium-sized conventions that will benefit the entire downtown. "You're talking about 300 to 400 to 500 people in any given week, sometimes in the middle of winter, professionals often times with large amounts of disposable income, walking around downtown, spending money and more than anything looking for hotel rooms," he said.

Racine taxpayer activist George Meyers argued that proceeds from the tax incremental districts should go into the general fund instead of being used to finance development.

The full council will consider the plan next month.

An Alleged Case of Police Brutality is Probed