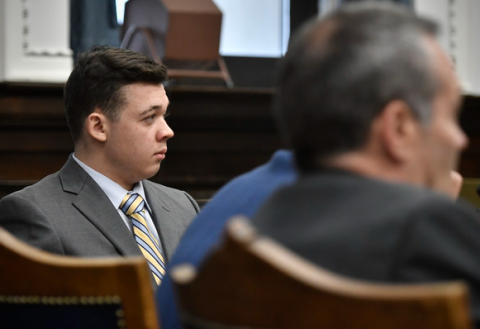 (WGTD)---The jury in the Rittenhouse trial goes back to work Thursday morning to begin a third day of deliberations.

While jurors deliberated Wednesday, the attorneys spent time in court discussing problems with a video that had been admitted as evidence.

The video was taken from a drone, and shows Rittenhouse wheeling around and shooting the first man who got shot, Joseph Rosenbaum. The video surfaced late in the case, and questions were immediately raised over whether moves to clarify the image somehow distorted frames. Judge Schroeder allowed it in, and also granted the jury’s request yesterday to view it again.

Rittenhouse attorney attorney Corey Chirafisi raised a new complaint, saying that the defense had received an inferior copy. He says they would’ve approached the case differently had they received the better video.

He’s asking judge Schroeder to declare a mistrial. Speaking on the WGTD podcast, “Inside the Rittenhouse Trial,” Kenosha criminal defense attorney Bob Sfasciotti believes a mistrial ruling in the event of guilty verdicts is unlikely.

Also Wednesday, two people who were part of the crowd that had gathered near the courthouse in anticipation of a verdict were arrested. A 20-year-old man was arrested for battery, disorderly conduct and resisting arrest while a 34-year-old woman was cited for disorderly conduct. The police and sheriff’s departments put out a joint news release, saying that several additional officers were needed to keep crowds of citizens and media from interfering in the arrests. They asked for cooperation from both citizens and media outlet.