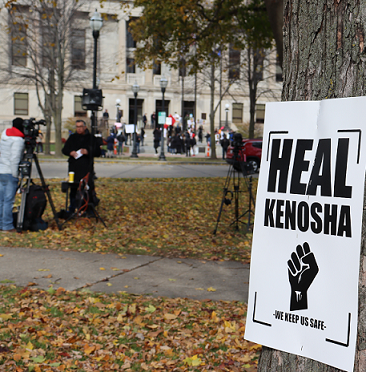 (WGTD)---The jury in the Kyle Rittenhouse trial took a pizza lunch break just after noon Tuesday, after having gotten the case around 9:15 a.m.

The morning in Judge Bruce Schroeder's courtroom began with the jury being whittled down to 12 from 18. Rittenhouse himself drew the numbers of the six jurors who were selected to be alternates from a tumbler. The three men and three women were escorted to a separate room to wait in reserve in the unlikely event that one or more might be needed. The remaining jurors consist of seven women and five men. The lone person of color remains on the jury.

Within an hour after being sent to deliberate, the jury foreman asked for 11 copies of the first six pages of the 36-page packet of jury instructions. The requested pages focus in good part on the instructions that pertain to self-defense.

The verdict watch includes a small crowd that has gathered near the courthouse and across the street in Civic Center Park, along with a large media presence. A couple of dozen supporters of the two men who were killed and the third who was wounded gathered on the courthouse steps with a drum, bullhorn and signs.

Meanwhile, the Kenosha police and sheriff's Departments put out a joint statement assuring residents that they're adequately prepared for whatever may happen in the aftermath of the verdict. "Our departments have worked together and made coordinated efforts over the last year to improve response capabilities to large scale events," the release says. "We have also strengthened our existing relationships with State and Federal resources. To date, we have no reason to facilitate road closures, enact curfews or ask our communities to modify their daily routines."