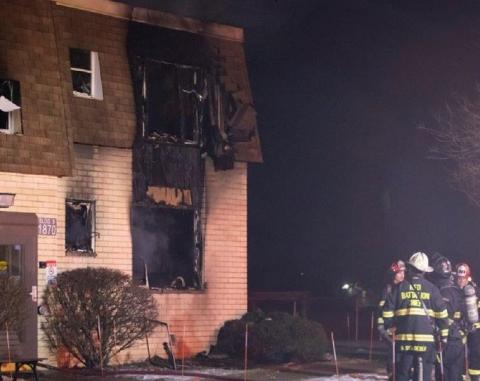 (WGTD)---Three people are now reported dead following an overnight fire at a housing complex for older adults on Kenosha's north side.

A news release issued at mid-morning indicated that two bodies were found late Monday night. One appeared to have died as the result of a medical event unrelated to the fire. A third victim died at the hospital.

A Kenosha police officer who suffered a case of smoke inhalation was taken to the hospital and later released.

The first firefighters who rolled up to the 16 unit, two-story building found the entire structure to be filled with toxic smoke. The building's west side was "consumed with flames."

Before firefighters arrived, police officers rescued several people. "Had it not been for the rapid response and evacuation efforts by the Kenosha Police Department there would likely have been more injury or death," the release said.

Two residents who were trapped on the upper floor were rescued by firefighters using ladder trucks.

The fire was brought under control in 30 minutes.

As of mid-morning, two people remained unaccounted for, but authorities don't believe they're in he building.

According to its website, Saxony Manor rents to income-eligible people 62 years old and up.

The cause of the fire is under investigation.