Search is on for Missing Model Market Tenant; Fire Cause 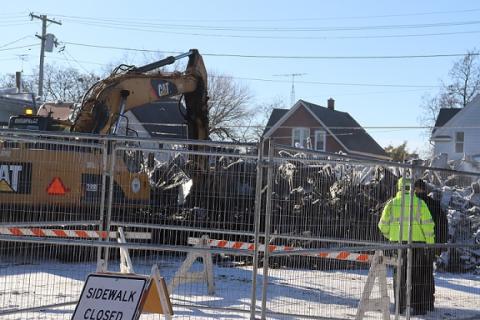 (WGTD)---Arson hasn't been ruled out as a possible cause of Wednesday night's fire that destroyed a century-old corner grocery store near Kenosha's Uptown area. In addition, the Fire Department confirms that an apartment tenant of the building remains unaccounted.

The missing person was identified on social media as John Mikus, who was last seen in the building at the time of the fire.

In a news release, Fire Chief Christopher Bigley said that a search process is currently underway for both the missing person and evidence of how the fire may have started. An excavator was probing the debris Friday.

The original report at the time of the alarm was that the blaze began in an oven.

The first firefighters on the scene saw nothing amiss. According to scanner traffic, police officers were already clearing the building and evacuating neighbors.

Once inside, firefighters were met by smoke, the volume and color of which signaled that the blaze was spreading rapidly, according to what Bigley told WGTD News the day after the fire. Firefighters immediately took up defensive positions.